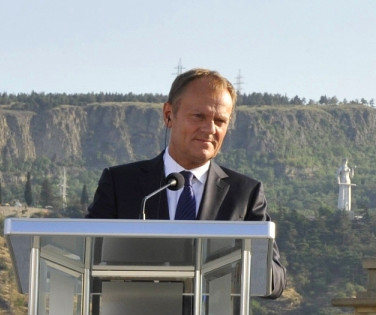 Tusk went to the area near Khurvaleti and Tsitelubani, where Georgian journalists protested over a week ago against the new signs, which are causing problems for locals in accessing their farm land.

He was accompanied by representatives of the EU Monitoring Mission in Georgia (EUMM) and did not offer comments to the media.

Later the same day, Tusk met with Prime Minister Irakli Garibashivli to discuss Euro-integration issues. The PM thanked him for visiting Georgia and said he viewed it as clear proof of the EU’s support for the country

At a joint press conference after the meeting, Tusk said that he evaluates highly the government’s response to provocations regarding the administrative border this month.

During the visit to the conflict zone, he witnessed how the demarcation lines are installed, and he thinks this is a provocation. The initiators of the provocation would wish for an overreaction, Tusk noted, which requires a firm, but responsible, response.

The Georgian PM said he hopes the EU will make a positive decision about visa liberalization at the end of the year. He said the government is motivated to fulfill all its obligations under the visa liberalization action plan and he is confident that Georgia will have no ‘drawbacks’ from doing it.