Both sides speak of provocations at South Ossetia field meeting

Both sides speak of provocations at South Ossetia field meeting 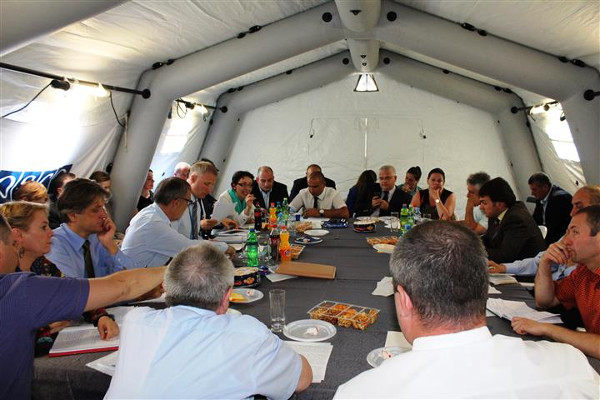 The South Ossetian news agency RES reported that the meeting was called by the South Ossetian side to respond to ‘provocations’ over the last ten days, referring to recent protests organized by Georgian journalists.

“In the case of a recurrence of such actions in the adjacent territory, without any doubt, it will be followed by an appropriate response,” RES quoted a de facto official saying.

Georgia’s Ministry of Internal Affairs said the Georgian party discussed problems caused by the installed fences and signs and the appearance of armed people near the border. They also underlined that local people in villages close to the border have their freedom of movement restricted and have problems during harvesting.

EU Monitoring Mission, one of the co-facilitators of the IPRM meetings, writes that the extraordinary meeting was called to discuss the current security situation and in particular the recent events in the vicinity of the villages Tsitulebani and Orchosani.

“Discussion revealed differences in perceptions regarding the origins of these events, the participants committed themselves to take the necessary measures to keep the situation calm, as it has evolved over the last couple of days,” EUMM writes.

Representatives of the de facto republic promised the Georgian party to call via a hotline and return a Georgian flag which journalists left near the border after the rally and which was taken down by the Ossetian armed group.

“Access by the farmers to their land was discussed and further information regarding the harvest was offered to be communicated through the hotline in the coming days.” EUMM further informs.

Leader of the breakaway authorities, Leonid Tibilov, told RES that the Russian leadership has nothing to do with the incident ten days ago. Activists in Tbilisi blamed the border moving on Russia and rallied on Saturday to demand a tougher stance by the government.

The next regular IPRM meeting will be held on 30th July.