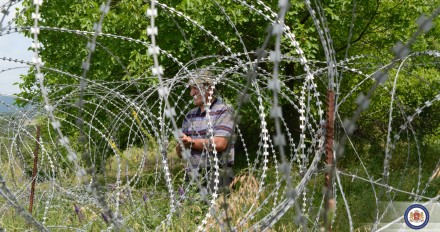 Georgian farmer behind a razor wire near Khurvaleti village. July 13 (The Ministry of Foreign Affairs)

Tbilisi, DFWatch – Recent push of the Russian border troops inside mainland Georgia left behind parts of Georgian settlements and agricultural lands, as well as an underground portion of significant pipeline that is used to export crude oil from Azerbaijan via Supsa terminal on Black Sea coast bypassing Russia, and caused massive outrage in Tbilisi.

President Giorgi Margvelashvili met with representatives of the EU Monitoring Mission, as well as Georgian Oil & Gas Corporation and the BP, which operates the pipeline.

“For each Georgian citizen and, of course, for me too, it is absolutely unacceptable each new meter of the dividing line on a sovereign Georgian soil, especially when such a line runs near the strategic facilities,” the president stated.

The representatives of the EUMM presented to the president their findings on the scene. They confirmed that two new border signs have been installed nearby the villages of Orchosani and Tsitelubani, deeply into the Georgian-controlled territory, nearby “the significant infrastructural facilities.”

On Saturday the Ministry of Internal Affairs confirmed that portion of the Baku-Supsa pipeline “fell within the occupied territory.”

“On July 10th… Russian Occupying Forces illegally placed banners marking the so called ‘border’ on the territory adjacent to the village of Tsitelubani of Gori municipality and the village of Orchosani in occupied Akhalgori district in close vicinity to the Tbilisi-Gori central highway.

“…A certain portion of the pipeline next to the village Orchosani fell within the occupied territory,” – the MIA statement reads, referring to the underground portion of the Western Route Export Pipeline, or Baku-Supsa Pipeline.

Altogether Russians pushed “the border” up to 1 km inside territory previously controlled by Georgian side, thus including portion of the Baku-Supsa pipeline inside its border infrastructure.

The border signs are now few hundred meters (in one point slightly over 450 meters) away from strategically important highway that connects Tbilisi with western Georgia. This highway is also a main trade route connecting Azerbaijan and Armenia with Black Sea ports of Poti and Batumi.

The process of reinforcing border infrastructure started soon after recognition of South Ossetia’s and Abkhazia’’s independence by Russia in 2008 in the wake of the August War. Since then Russian border troops have been guarded breakaway republics’ perimeter.

While administrative border between Abkhazia and province of Megrelia runs mostly along the Enguri river, there are no clear geographical landmarks marking off former South Ossetian autonomous district, nowadays breakaway South Ossetia, from Gori and Georgia’s other “mainland” districts.

During Soviet times and since then the frontier demarcating former SOAD used to be mainly formal and since the beginning of the Georgian-Ossetian conflict in late 1980s, the conflict lines ran mostly along the ethnic settlements.

However, since 2008, when Russia recognized South Ossetia’s independence, the latter has set about to consolidate its “territorial integrity”, which has mostly been expressed in pushing “borders” inside lands of Georgian farmers.

This recent move affected roughly 10 acres of agricultural land and was particularly unexpected for the local population as their lands where they had been processing soil a day earlier, overnight became a territory of “a different state.”

However, Russian troops so far allow them to use those lands, until harvesting in the fall.

By far bigger potential threat poses actual control of the pipeline by Russians, as the Baku-Supsa oil route bypasses Russia and is seen, along with its sister Baku-Tbilisi-Ceyhan pipeline, as a threat to Russia’s grip on Caspian and Central Asian energy resources.

Kakha Kaladze, Vice Prime Minister and the Minister of Energy, says that if any problems arise with the Baku-Supsa pipeline, the government will immediately replace the “problematic” portion.

“Here we are talking about building a new 1500-1600 meters (of pipeline),” – Kaladze said to the First Channel. “If we see a problem to this particular pipeline, we immediately can build a new route. The project already exists and if there are problems, we will implement it.”

The Ministry of Foreign Affairs plans to raise this issue in the UN, OSCE and “use all the levers to respond to the provocative actions of Russia.”