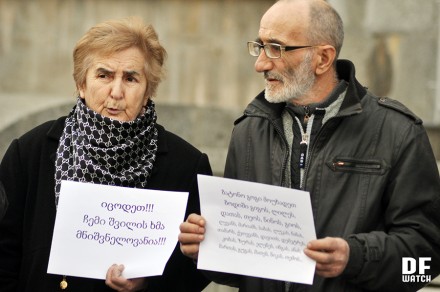 TBILISI, DFWatch–Gogi Topadze’s use of handicapist language provoked reaction from Georgia’s top politicians and a demonstration in Tbilisi’s center.

MP Gogi Topadze’s use of Down’s syndrome as a term of abuse provoked a variety of reactions from politicians and civil society.

‘Mister president, I would like to express some criticism towards you. You are the first man in Georgia. All your proposals, words, utterances are analysed. I would like you inform you that your words about the Georgian people, the Georgian nation — you are comparing the Georgian people to daunebi. It is very unfortunate if that’s how you value Georgia’s population. In such case, perhaps, you shouldn’t have dared becoming a president’, Mr Topadze said.

The word dauni is a Georgian insult which refers to people with Down’s syndrome. 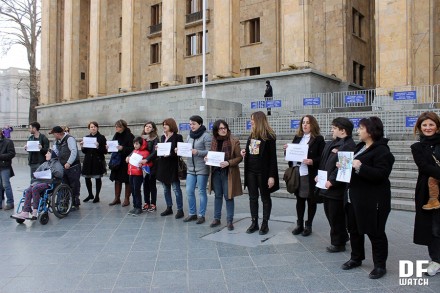 Georgia’s minister of justice Tea Tsulukiani apologised to children with Down’s syndrome and their parents.

‘I think that this statement comes more from immaturity, but it doesn’t matter, as it is beyond any borders. I don’t think that it is a problem to apologise. I personally apologise all children with Down’s syndrome and their parents. The right of all these children to be equal before the law must be protected. We are a ministry and a government which has always worked on children’s rights, which is why, obviously, such statements are utterly unacceptable’, Ms Tsulukiani said.

‘I think that Mr Topadze’s statement is uncommentable. Georgian society will give the amplest response to his statement’, head of the Presidential Administration Giorgi Abashishvili noted.

A group of up to 30 people demonstrated today in front of the parliament building against Mr Topadze’s discriminatory remarks.

DF Watched asked for a comment Ana Abashidze of NGO Partnership for Human Rights, who participated in the demonstration.

‘I would like to point out that the problem which is the reason for gathering isn’t only Topadze’s problem. It’s more of a systemic problem than one of a specific politician. Unethical and offensive messages are perpetuated by all political forces in our country. We protest all such politicians and demand respect for this country’s citizens, who gave these politicians legitimacy by means of elections,’ Ms Abashidze said. 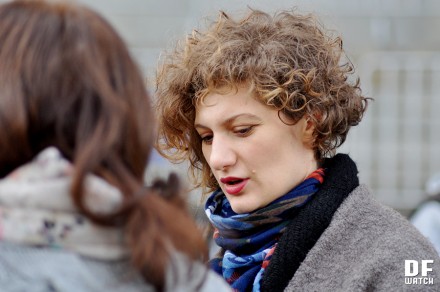 ‘Our MPs need to learn to take responsibility for such statements, including political responsibility. Their colleagues should demand it. Parliamentary ethics and appropriate sanctions should exist. This is not the first time that the condition of people with Down’s syndrome is used as an insult. I believe that Gogi Topadze should be held responsible and decide to give up his mandate’, Ms Pataraia said.

‘Yesterday, my speech was met with ambiguous reactions and my words were interpreted incorrectly. I only quoted Giorgi Margvelashvili’s words which were published in magazine Dro Mshvidobisa (‘Peace Times’) in an article called “Like hell! I’m Georgian”. I pointed out that such statements weren’t worthy of a Georgian man and if that’s how the president values the Georgian society, then perhaps he shouldn’t have dared to become a president. I, as a part of society, find such words offensive.’

‘I didn’t want to insult anyone and if a part of our society interpreted my words in such a way, I apologise them. I also call Georgia’s president to apologise the society his words insulting the Georgian nation. Society is one for me and I’m not dividing it’, Mr Topadze’s statement reads.

The article in question was published in 2001 and makes use of term msubuki debiloba (‘mild moronism’) as a metaphor of certain issues found in Georgian society at the time. In 2000 Giorgi Margvelashvili used to be rector of Georgian Institute of Public Affairs (GIPA)