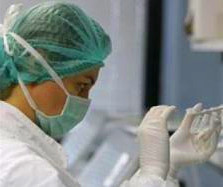 TBILISI, DFWatch–Swine flu has claimed its ninth death in Georgia, according to National Center for Disease Control (NCDC).

A young woman died two days ago in the Adjara region in the southwest of Georgia, and laboratory tests confirmed that she had H1N1, one of the viruses causing swine flu.

Giorgi Chakhunashvili from NCDC told Rustavi 2 that the patient was in a risk group and she received treatment too late, which was also a factor in most of the other deaths due to the disease.