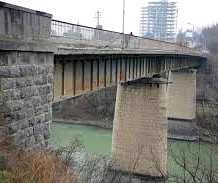 TBILISI, DFWatch–The director of a construction company was detained on Thursday accused of embezzlement of more than 1.5 million laris.

According to the Finance Ministry’s investigation service, the company Construction-Commercial Corporation Bridge LLC was responsible for rehabilitating the Zahesi bridge in Avchala, a suburb on the northern outskirts of Tbilisi.

The company, which was founded by Teimuraz Tsitsvidze, won a tender announced by Tbilisi City Hall to rehabilitate the bridge and construct a section of railway. Investigators accuse Tsitsvidze of not fulfilling his obligations and appropriating 1,526,437 laris (more than USD 612,000).

He was detained and charged under article 183 of the Criminal Code, which may be punished with 7 to 11 years in jail.