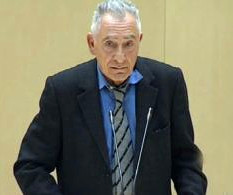 Gogi Topadze, previously known for his praise of Stalin a few months ago, claimed that the president in his national address compared the Georgian people to people with Down’s syndrome.

However, President Giorgi Margvelashvili did not mention Down’s syndrome in his speech, nor did he compare people to anything. Other parliamentarians were baffled as to why Topadze said so.

The president’s reaction to Topadze’s remark was turned into a gif image that went viral on the Internet (see below).

The incident took place during a debate after Margvelashvili’s state of the nation address on Wednesday. Topadze said all of the president’s sentences, words and letters will be analyzed.

“You compared the Georgian people to people with Down’s syndrome. It is a pity if you evaluate people this way. You probably never had to dare become a president in Georgia,” he said, later criticizing the president for moving into the palace in Avlabari, which was built by ex-President Mikheil Saakashvili, and for attending a UN event with a separate delegation, while the prime minister was also present with his delegation.

“You should have foreseen that the former PM was one of the founders of Georgian Dream and it was possible to find a compromise and never show to people abroad that two leading figures of the state cannot agree,” he said.

Gia Volski, head of the GD fraction in parliament, asked Topadze to explain his statement or apologize.

“I believe that he is obliged to name certain data and quotes to prove his statement,” he said, adding that otherwise he will have to apologize to the president and to the public.

MP Levan Berdzenishvili from the Republican Party said he could not understand why Topadze used such a term; he could not find any basis for it in the president’s speech either.

“To be honest, I cannot understand what it was. I couldn’t understand Mr Gogi’s statement.”

After Topadze’s remarks, the president applauded with a frozen expression. He was the only one applauding.