Democracy campaign on the streets again

Democracy campaign on the streets again 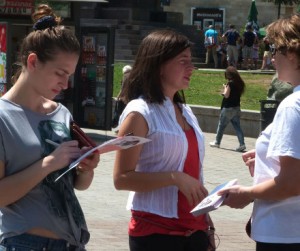 TBILISI, DFWatch – A democracy campaign in Georgia is keeping up the pressure on the government to change the law to counteract pro-government bias in TV media ahead of the election in October.

The campaign This Affects You Too started in February as a reaction to legislation introduced by President Saakashvili’s governing party. It continued today with a rally in downtown Tbilisi.

Campaigners handed out leaflets and explained to passers-by the benefits of introducing a bill prepared by media and organizations working with legal issues. The goal is to counter pro-government bias by requiring cable networks to carry a broader selection of TV channels, so people may get more diverse information before they vote in four months.

If the bill is passed, it will require cable operators to carry – nationwide — two small independent Tbilisi-based stations, Maestro and Kavkazia, and the new Channel 9, which is run by people connected to the opposition billionaire Bidzina Ivanishvili. Today, almost all cable companies refuse to carry these three channels, which daily bring news critical of the government.

The bill will also require TV stations to allow their signal on to all cable networks. The reason this has become an issue, is that the only cable company that carries opposition-friendly Channel 9, Global TV, is being boycotted by the two national channels Rustavi 2 and Imedi, which do not allow their signal to be used by Global TV. The latter is perceived to be opposition friendly and is owned by the brother of Bidzina Ivanishvili.

In legal terms, these two principles are called ‘must-carry’ and ‘must-offer’, a form of media regulation which is enforced both in Europe and the United States. The former means that cable networks are obliged to carry the signal of a broadcaster provided that there is agreement over price or if the broadcaster offers its signal for free. The latter means that if national broadcasters must allow cable networks to carry their signal until the elections are over.

The bill also suggests holding political debates; defines what a hidden political commercial is, and draws up rules for placing paid and free political advertising and it also defines rules for usage of administrative resources.

The bill was submitted to parliament on May 7 where, it has been reviewed by the bureau not yet been given status as a legislative initiative.

Campaigners achieved some measure of breakthrough in April, after negotiations with the judiciary committee in parliament. This led to parliament adopting some of the changes suggested by the group.

Many newspapers also expressed solidarity today by printing a banner reading “I want to watch to all Georgian TV stations! Legalize Must-carry!”