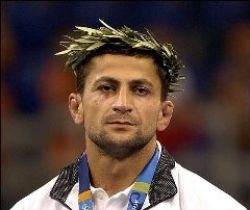 Zurab Zviadauri anticipated trouble with authorities when he joined the opposition, and therefore transferred his shares in a construction company to a friend. He believes the government was behind a customer protest action Monday. (IPN.)

TBILISI, DFWatch – Monday the offices of a construction company in Georgia was invaded by a group of people demanding that the company completes construction work on flats that many customers have invested in.

The office invaders claimed to be relatives of customers of Olympic Star, but company representatives says most of them were ruling party activists.

According to the company’s representatives, all their clients know that the reason construction work has been suspended is certain problems in relation to Bank of Georgia.

The company says Bank of Georgia does not allow them access to an approved loan of USD 5 million, which is required for the completion of the apartments. Because of this, the company has also been charged with paying GEL 8 million in interest.

Olympic Star links this provocation to the political activity of one of its owners, Olympic judo champion Zurab Zviadauri.

Zviadauri himself also links the current situation to his support for the Georgian Dream, the opposition movement lead by the billionaire Bidzina Ivanishvnili.

He says he was aware of the consequences his decision could have and transferred the ownership of his share to his friends. “But as you see, the government still held a provocative demonstration,” Zviadauri says.

Bank of Georgia accuses the company of unreasonable expenditure of the funding.

“The cooperation with Olympic Star started in 2006. After 2008, the bank once again issued a loan under the program of Old Tbilisi Rehabilitation. However, company continued unreasonable spending of the allocated finances, therefore it was unable to fulfill obligations and could not cover the loan. Hence, the bank refused to issue a new one,” says a statement from Bank of Georgia.

A representative of the bank says they are closely coordinating with the client group to prevent them from suffering more damage than they already have.