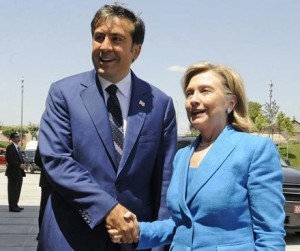 TBILISI, DFWatch – U.S. Secretary of State Hillary Clinton is expected to arrive in Georga from Armenia Monday evening as part of a tour of the South Caucasus.

Tomorrow Clinton is meeting with President Saakashvili and Prime Minister Nika Gilauri, and later leaders of the opposition.

The Secretary of State will then go to Batumi, a port and holiday resort on the Black Sea, to open a plenary session of the U.S.-Georgia strategic partnership commission.

Erik Rubin, Deputy Secretary of the State, human rights ambassador at the U.S. State Department Michael Kozak and John Bass, Ambassador to Georgia, are already in Batumi, holding meetings with various organizations about transparency in the courts, problems experienced in the voluntary sector, as well as by the media and the trade unions.

Clinton will leave for Azerbaijan on June 6.

The embassy says the plan for her schedule in Georgia is still undergoing revisions. It is yet unknown whether the Secretary will be meeting Saakashvili’s main political competitor, Bidzina Ivanishvili. Last week, the billionaire sent a letter to Clinton asking her for a meeting.