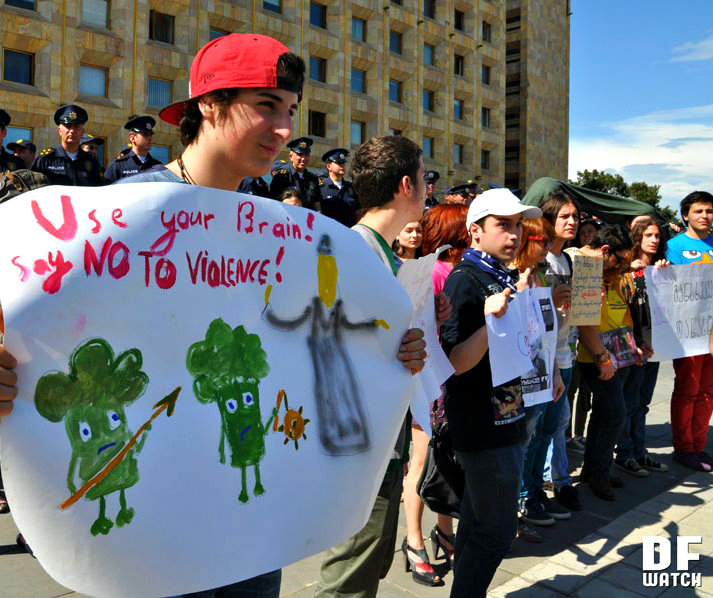 TBILISI, DFWatch–A peaceful rally to protest Friday’s violent clashes went ahead without serious incidents outside the government office on Saturday.

In the afternoon, LGBT activists and their supporters started gathering in front of the government’s office, the Chancellery.

As they arrived, there was gathered up to ten people from the National Front holding a large poster which read: ‘Homosexuality is a spiritual and psychological defect. Propaganda for perverted sexual acts and immorality should be prohibited.”

The Interior Ministry was notified about today’s rally, and the police was mobilized throughout the area. The police made a cordon between the counter-rally and the LGBT activists and prevented activists from the National Front to cross the line and go over to the other side, where LGBT activists were gathered.

During the rally there were cases when some of the counter-demonstrators managed to sneak into the other side and yell things like “you’re against nationality, against religion and the values of Georgians”; but the police forced them over to the other side of the line.

There was no physical confrontation on Saturday, only verbal insults.

The rally was held to condemn the violence by the Orthodox Church’s clerics and followers, who yesterday attacked activists for LGBT people’s rights. 28 persons were injured in the clashes, among them two journalists and three policemen. Only two still remain in hospital.

Participants at today’s rally demanded that the guilty are punished.

Lasha Jokhadze, Deputy Head of the Patrol Police Department in Tbilisi, who came to the rally, said that there has been launched several criminal investigations regarding yesterday’s violent incidents.

The rally was dissolved peacefully after one hour.