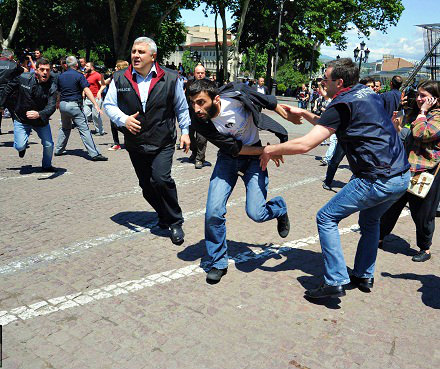 TBILISI, DFWatch–Amnesty International says the police in Georgia failed to protect demonstrators from aggression on May 17.

The human rights group which has more than 3 million supporters worldwide believes that the police failed to protect lesbian, gay, bisexual, transgender and intersex (LGBTI) people who were planning a flash mob to mark the International Day Against Homophobia and Transphobia, but Orthodox clerics and parishioners attacked them, and the event had to be canceled.

“Ironically this shameful violence marred a day that is meant to mark solidarity in the face of homophobic violence around the world, and it shows that the Georgian authorities have a long way to go to promote tolerance and protect LGBTI people and their human rights,” said John Dalhuisen, Europe and Central Asia Programme Director at Amnesty International.

Georgian NGOs that work with promoting human rights have a similar opinion.

Kakha Kozhoridze, head of Georgian Young Lawyer’s Association, said: “The Interior Ministry could not provide security and the police was inactive, so the crowd easily broke through the cordon and could not prevent violence against LGBT demonstrators.”

Public Defender Ucha Nanuashvili, who was verbally abused by counter-demonstrators, partially agrees with Georgian human rights groups. He said that at first, the police was in control of the situation, but after the chaos emerged, the police could not handle the parishioners.

Transparency International Georgia, GYLA, International Society for Fair Elections and Democracy and other civil groups made a joint statement and called on the Interior Ministry to bring to justice those officials who were responsible for the failure to adequately assess possible risks, to investigate and bring to the justice everyone who prevented citizens from conducting a rally against homophobia and abused them physically and verbally.