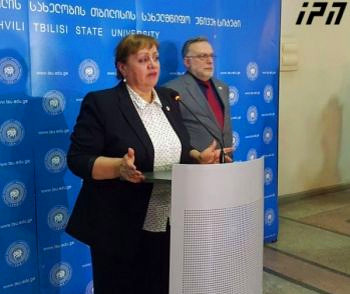 TBILISI, DFWatch–Academic staff at Tbilisi State University voted for a new acting rector on Wednesday. The winner was the vice rector, Darejan Tvaltvadze, who received 526 out of 967 votes cast.

Tvalavadze can be acting rector for maximum six months. 1,311 academic staff at TSU were registered to vote and the turnout was 73 percent. 49 ballot papers were invalid.

Tvaltvadze is professor of philology at the humanities faculty of TSU. She has been vice rector since November, 2015.

Former rector Lado Papava resigned March 30 in the wake of protests by a spontaneous movement called Auditorium 115 and the students’ union.

Irakli Kupradze from Auditorium 115 told journalists Wednesday that as a candidate Tvaltvadze was ‘more or less’ acceptable for everyone, but the movement doesn’t like her candidacy because she promises stability but not changes and they want fundamental changes at TSU.

Kupradze expressed hope that Tvaltvadze will organize a fair election for new rector.

Shalva Sabauri, president of the students’ union, said earlier that the union didn’t have any favorite in the election but Tvaltvadze was quite an exceptional leader. The election proceeded calmly and they trust the results, he said.

“We will fight together with students for a better university,” Tvaltvadze said, after the election, adding that her first priority will be to prepare the university for the election of rector and chancellor.

In the middle of May, there will be election of members of the academic council. The rector’s election will likely be held in August.