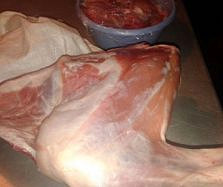 TBILISI, DFWatch–A dangerous parasite of the type sarcoysistis has been found in meat at a kindergarten in Tbilisi.

The parasite was found by the National Food Agency, which is doing checks following the recent discovery of dangerous semi-prepared food.

Sarcocystis – the parasite found in meat at kindergarten No 121 in Tbilisi, can cause an infection that is normally mild and lasting only 48 hours, but the intestinal form may be severe and even life-threatening, according to Wikipedia.

Interpressnews reports that the agency has ordered a recall of meat supplied by the company that was the source of this contaminated meat.

After the recent discovery of dangerous semi-prepared food in Georgia, the National Food Agency is inspecting kindergartens and slaughterhouses and checking products that are offered for sale.

The agency is doing checks on semi-prepared food, milk, fish and meat.

On Monday, the agency found 300kg of suspicious meat at Vakhushti Bridge in Tbilisi. The meat was produced by Kartuli Produkti (Georgian Product) Ltd.

According to the agency, the meat didn’t go through a veterinary-sanitary control before and after slaughtering, and during the inspection the producer was not able to present the necessary documentation, and was fined 1,000 laris (about USD 500).

As required by law, the meat was sealed and will be destroyed.

This is the second time National Food agency has found suspicious meat produced by Kartuli Produkti.