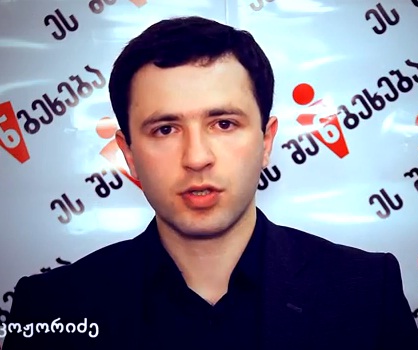 Kakha Kojoridze from Georgian Young Lawyer’s Association, one of the groups in the campaign. (Promotion video.)

The campaign ‘This Affects You Too’, which includes several of the most influential NGOs in Tbilisi, was started in 2011 as a reaction to legal moves by then President Saakashvili’s government curbing the rights of an opposition coalition started by businessman Bidzina Ivanishvili.

After the change of government a year later, the campaign continued, their demand now being that an archive of surveillance material illegally amassed during Saakashvili should be destroyed.

Some of the material was video clips shot with a hidden camera of people in private situations, including sexual acts.

The so-called dirty archive has now for the most part been destroyed, but the NGOs claim that illegal wiretapping is continuing and demand that the government establishes clear privacy protection. Therefore, the name of the campaign has been changed to ‘This Affects You Too-They Still Listen to Us’.

The Council for State Security and Crisis Management initiated the creation of a temporary interagency group that will develop a strategy related to covert investigative operations and protection of human rights.

The group will have members from the Interior Ministry, the Ministry of Justice and the Prosecutor’s Office, and the initiators plan to cooperate with the civil sector and international organizations.

But the NGOs suspect that the process is being delayed, because another group has already been working with the same issues for nine months and is successfully cooperating with the Interior Ministry, international organizations and NGOs.

“If the government will dissociate itself from parliamentary discussions, this will cause a suspicion that the executive law enforcement agencies are trying to prolong and impede legislative discussion processes,” the campaign’s statement says.

The NGOs call on the government to support the process to eliminate the practice of illegal wiretapping and call on parliament not to prolong the process to change the criminal procedure code in ways related to surveillance.