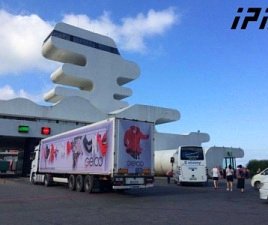 TBILISI, DFWatch–Authorities in Georgia decided Saturday morning to seal its land border to its neighbor Turkey and cancel all flights into that country for the time being, out of concern for the safety of civilians.

At the border crossing near Sarpi, only Turkish citizens are currently allowed to enter Turkey from the Georgian side. In the other direction, entering Georgia, there are no new restrictions in connection with the recent events.

According to local reports, Georgians are now waiting at the Sarpi border crossing, as most of them work in bordering villages and they cross the border every day.

A flight from Istanbul’s Ataturk airport to Batumi has been cancelled. It was scheduled to depart at 9.20am this morning. Another flight from Batumi to Turkey was also cancelled at 10.35am. It is still unknown when the two flights will be carried out.

The latest casualty figures reported by Turkey’s state-run news agency indicate that around 90 people have been killed, and over 1,000 injured in the failed coup. President Erdogan claims that the government is in control.

Prime Minister Giorgi Kvirikashvili advised Georgian citizens to avoid going to Turkey until the situation is stable. He said that it is not yet advisable as the situation is still unstable. He expressed hope that everything will be in order within a short period of time.

Early in the morning, President Giorgi Margvelashvili summoned a session of the National Security Council. After the meeting, Kvirikashvili said that they discussed whether there would be any threats for Georgia.

NSC went through information received from the State Security Service and the Ministry of Internal Affairs and assessed the situation on the borders.

“Out of concern for the safety of our citizens, we prohibited border crossing to Turkey,” he said, and added that the airspace has been temporarily closed and for the time being there are no flights to Turkey.

Nino Kobakhidze, Deputy Head of the Government Administration wrote on her Facebook page that AtlasGlobal will implement a flight today at 4.20pm (Ankara time) from Istanbul to Tbilisi.

At about 05.30am in the morning, after the NSC session was over, President Margvelashvilis said that Georgia was in no danger and no emergency measures have been planned. He also advised citizens to avoid travel to Turkey. He expressed support for the Turkish government and his colleague, President Erdogan.

After the council meeting, the PM said the NSC might be summoned again in the morning to reassess the decision to close the land border with Turkey.

Minister of Economy Dimitry Kumsishvili, who is deputy PM, said that the government is taking measures to find out how many Georgians are at the airport in Istanbul and how to help them.

The border with Turkey may open soon, he added.

1,500 members of the armed forces have been detained after the failed coup attempt, according to Associated Press. 16 coup plotters were killed and 250 detained during clashes at the military police headquarters, according to Turkey’s police chief, as quoted by the agency.