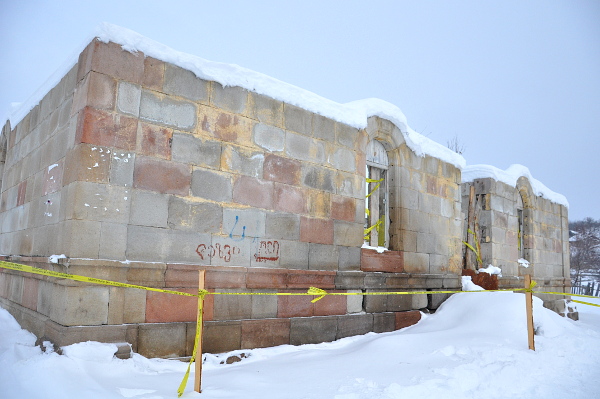 ADIGENI, DFWatch–A dispute about the ruins of a mosque in the village Mokhe in the south of Georgia has deteriorated further after Christians began conducting prayer on the site.

Muslims began holding Friday prayers on the ruins two months ago and did not stop after an attempt by a government commission to solve the conflict by recommending making the place a ‘disputed cultural heritage’ site.

The two sides have been at odds for the last two years. Muslims claim the open air site used to be a mosque, while Orthodox Christians claim it used to be a church. The latter prayed there on Saturday, while Muslims conducted their usual Friday prayer there.

DFWatch visited Mokhe for Friday prayer, which was held in the snow in -9 C degrees. About 60 people came to pray. Due to the snow and ice the road trip took longer than usual and we were late for the prayer but we managed to speak to the Muslim community in Mokhe about the latest developments.

What they are protesting now is the decision of the so-called Mokhe commission, which was created when the conflict began two years ago to find out who the ruins belonged to. Instead of giving the ruins to one of the sides, the commission decided to grant the site status as ‘disputed cultural heritage’. It also offered Muslims the option of constructing a new mosque somewhere else, but they do not believe that this decision will be implemented. They also object against the ruins being conserved and have status as a disputed building. 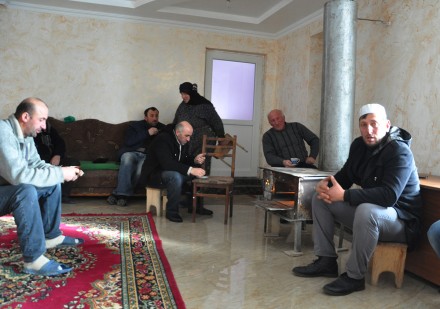 Jemal Iakobidze says the Muslim community in Mokhe feels an obligation to the ruins to make sure that it is not insulted and robbed.

“We do our best to preserved the ruins and give them an actual name of mosque. We’ve never asked for constructing a new mosque and this is not an issue right now,” he told DFWatch, adding that it was just an excuse of the commission to bring up this issue in order to avoid declaring the ruins a mosque. 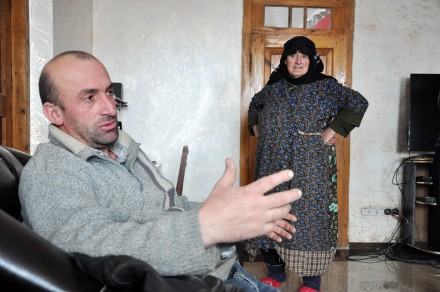 Muslims turned out to protest, and so did the Orthodox community, urged on by Nikoloz Getsadze, who is a head of Zarzma Monastery in Adigeni municipality. He has been involved in almost every conflict that has occurred in Adigeni municipality, including the conflict about the Chela mosque, where a minaret was erected and then dismantled.

“Of course we do not point guns at each other,” Temur Beridze says, “but imagine listening to your neighbor saying on television that the prayer of Muslims is a provocation.”

For the last two years, Muslims and Christians here have stopped being friends, he says, and this includes the children. There is tension.

“But it is not coming from their belief. It is something they are inculcated from someone who doesn’t want there to be peace between us,” they say, again indicating the clergy at Zarzma Monastery.

Local representatives of the Orthodox Church, however, claim that there used to be a church in Mokhe in the 16th Century, but it was turned into a mosque in the 1920s. 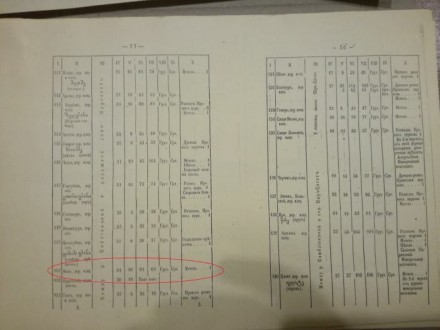 On the other hand, Georgia’s Muslim community published a document from an archive describing Tbilisi Governorate issued by Arnold Ziserman in 1870, which says that there was a mosque in Mokhe at that time.

On Saturday December 17, Nikoloz Getsadze conducted a prayer in front of the Mokhe ruins.

“With this act we want to say that we also have claims about these ruins, just like the Muslim population here. This used to be the foundations of a church and the ruins contain stones of the church,” Samkhretis Karibche quoted Getsadze saying.

The local Christians used to be silent about the issue as they were afraid of causing tension, he added, but holding prayer sessions here made sense because instead of protesting, people could pray under the sky every week, like the Muslims.

“We want to protest to say that this building should not be handed over to the Muslims.”

He also responded to the accusations that Zarzma Monastery and its clergy are behind the tensions in Mokhe.

“This is not true. If people were silent before this was because I asked them to and they respected it.” 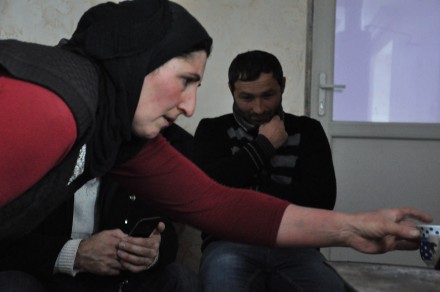 Getsadze continued saying that there may be prayer sessions on Saturday or any other day of the week in the future.

Muslims did not protest against the Christians starting prayer sessions. They said no-one will interfere in someone’s prayer.

But Muslims in Mokhe will not stop fighting until they achieve their goal, which is that the ruins are declared to be a mosque.