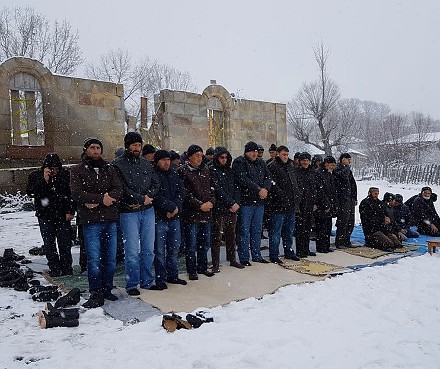 TBILISI, DFWatch–Muslims in Mokhe in southern Georgia do not accept a compromise suggested by a government commission and continue to pray on the ruins of a mosque in the village.

Local Muslims and Orthodox Christians have disagreed for two years about what should happen to the ruins. The local government wanted to build a culture center on top of the ruins, but local Muslims demanded that the ruins were preserved or the mosque rebuilt.

December 1, a commission which was tasked with settling the conflict and finding a compromise made its final decision. It recommended that the government should offer a new location to the Muslims for constructing a mosque, while the ruins should be preserved, as the decision was made in the beginning of November. The ruins will get status as disputed cultural monument.

Zaza Vashakmadze, who heads the State Agency of Religious Affairs, said after the commission meeting that the government will offer the Muslim community several locations in Mokhe for constructing a new mosque and this way solve their need for a prayer house.

“As soon as we select the location for the new mosque and transfer it to the Muslim community, then the ruins in Mokhe will get status as cultural heritage with the following name: disputed cultural monument,” Vashakmadze remarked.

Muslims in Mokhe do not trust to this promise. In addition, they are concerned about the fate of the ruins, which they believe used to be a mosque.

For more than a month, Muslims in Mokhe have gathered in front of the ruins and conducted their Friday prayer there.

November 25, when the Muslims again conducted prayer in front of the ruins, they read out a common statement saying that they made a mistake when the agreed to setting up the so-called commission two years ago. The work of the commission was out dragged in time with no actual results, the statement said.

The conflict dates back been more than two decades. Muslims asked the local government to preserve or restore the ruins in Mokhe, but in vain. In May 2014, the government decided build a culture center on the ruins, which caused the conflict to flare up. Muslims protested and demanded to hand the ruins back to them, but the local Orthodox Christians also protested. They were against rebuilding the mosque. This was when the commission was created to decide the fate of the ruins.

The Georgian church claimed that the ruins stem from a building that used to be a church but was turned into a mosque in the first half of the XX century.

Muslims in Mokhe demanded to abolish the so-called Mokhe commission and to decide the fate legal fate of the ruins without the commission.