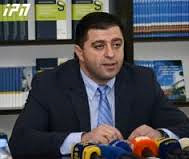 TBILISI, DFWatch–The chief judge at Tbilisi City Court was fired on Tuesday, sparking speculation that it might have something to do with his recent statements about corruption in the court and other controversial topics.

Twelve members of the High Council of Justice voted for Mamuka Akhvlediani’s dismissal. One voted against.

Council members claim that Akhvlediani was an ineffective manager and never heeded the advice he was given by the council, but made his decisions without consulting them. They accuse him of ‘arbitrarily’ distributing cases among judges.

The tension between council and Akhvlediani has been growing for months. In December, he said that Nino Gvenetadze, the head of the Supreme Court, and the High Council of Justice aren’t able to fulfill their duties.

In the beginning of February he said that tests for qualification of judges were leaked before the exam. He demanded a halt in the process of reappointing judges and an investigation into the case, and was backed by non-governmental organizations.

In February, the High Council of Justice launched disciplinary proceedings against Akhvlediani on grounds of an appeal by Gvenetadze. She said on February 23 that dismissing the Tbilisi chief judge doesn’t have anything to do with these proceedings.

Akhvlediani plans to appeal his dismissal in court, but first he is calling on the president, the government, parliament and foreign diplomats, as well as the international community, to alert them to problems in the court system. He believes his dismissal is connected to his frank opinions about problems in the courts. He met with NGOs, and discussed the exam tests case.

According to him, there was conducted an internal inquest at the council about this issue, but the council hasn’t sent anything to the Prosecutor General’s Office. Akhvlediani is sure that Gvenetadze is directly linked with these exams, as well as the deputy head of the council, Levan Murusidze, which is why he thinks that by sacking him the council attempted to cover up the alleged crime.

On Tuesday, Akhvlediani brought attention to further violations om connection with the tests for judges, and claimed that some computers had an Internet connection which people used to check the legislative herald (Sakanondeblo Matsne) while taking the test, and also raised the possibility that some of them had the answers on a memory stick.

Akhvlediani seses his dismissal as a form of persecution and claims that he never committed any violations during his service as chief judge and the council didn’t give him a chance to respond to the ‘absurd charges.’ Now he demands to fire the entire council, including its head.

Levan Murusidze, Deputy Head of the High Council of Justice, told journalists that Akhvlediani was an ‘ineffective’ manager and was often absent from work, which is why he was dismissed. But he remains a judge and the council has no complaints against him as a judge.

NGOs find the motive for dismissing Akhvlediani suspicious and intend to continue studying the case.