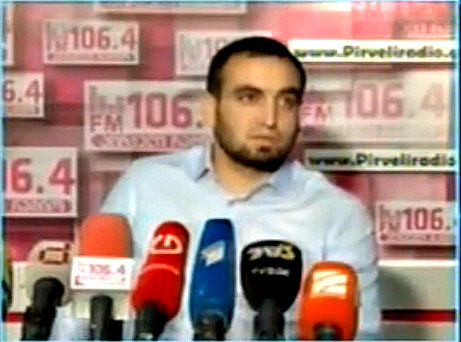 TBILISI, DFWatch–Some of the Chechens in Pankisi Gorge close to the Russian border say they are blackmailed and harassed by Georgian counterintelligence.

Saikhan Muzayev, a former Russian and Arabic translator for the Refugee Ministry, said at a press conference a few days ago that the Interior Ministry’s counterintelligence asked him to testify against former Deputy Interior Minister Gia Lortkipanidze and Sandro Amiradze, former head of the counter terrorism center in Kakheti, in connection with the deadly Lapankuri shooting not far from Pankisi in 2012.

Law enforcement bodies conducted what was claimed to be an antiterrorism operation in Lopota valley. It started at night on August 28, and the Saakashvili government claimed it was done to free five young men who had been kidnapped in the Lapankuri forest two days earlier.

The operation resulted in the death of two Interior Ministry employees, one military doctor, eleven members of an armed group, some of whom were Georgian citizens. https://dfwatch.net/two-law-enforcers-one-military-doctor-and-11-boeviks-killed-georgian-officials-report-17291

Muzayev held a press conference after he wasn’t allowed to cross border the Georgian border on January 18. He says the harassment started last spring, when he was brought to some facility in Tbilisi, then three times at the Interior Ministry. He says he was left there for more than three hours.

“They told me they knew I had problems with Russia and it was so. I came to Georgia as a refugee, and they threatened me that if I do not cooperate with them they would send me to Russia,” he said.

He added that he was to leave Georgia on January 18 but he wasn’t allowed to fly. No-one explained to him the reason.

“I didn’t do anything wrong,” he says.

Muzayev came to Georgia in 2011 and received status as refugee, but in October, 2012, he gave up his refugee status and instead applied for Georgian citizenship. He became citizen in spring 2013.

Aiub Borchashvili, from the village Jokola, who represents the organization Vainakh for Human Rights, told daily newspaper Rezonansi that a few months ago, he was also brought to some office in Tbilisi, where he was told that if he didn’t testify against several former Interior Ministry officials, they would hand him over to Russian special services.

He says Muslims have recently been pressured and many of them have problems during crossing the border, but no-one explains why.

“You have to call to thousands of government bodies, unless you are let go,” he says. Borchashvili assumes that it has to do with their religion.

“All the people keep staring at us. Due to our religion we have long beard, and people look at us with suspect and irony.”

He says he thinks that there is an attitude among the counterintelligence community of negative attitude towards the Pankisi Muslims.

Borchashvili also notes that Chechen refugees are also threatened, but they are afraid and don’t speak out about it.

Unofficially, 12 000 Chechens fled to Georgia in 1999 during the Second Chechen War, but only a few hundred refugees are left.