Chechen denied to leave Georgia, fears being turned over to Russia

Chechen denied to leave Georgia, fears being turned over to Russia 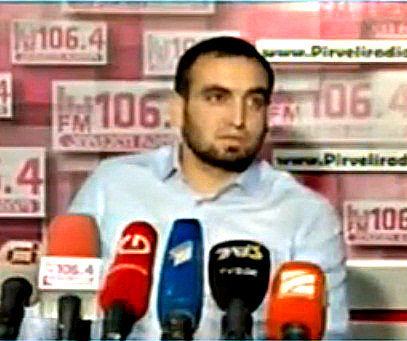 Saikhan Muzayev fears he will be secretly handed over to Russian counterintelligence. (Georgian Public Broadcaster.)

TBILISI, DFWatch–A Chechen refugee with Georgian citizenship told parliament on Wednesday that he is being pressured by authorities.

Speaking at a plenary session, Saikhan Muzayev said he has tried to leave Georgia ten times but was denied leaving every time. Tomorrow, he plans to try again.

Muzayev, who was invited by Irma Nadirashvili, a member of parliament from the National Movement party, said he used to work as a interpreter at the Ministry of Refugees but now lives in fear due to threats and is scared that he might be sent to Russia.

Questions have been raised about the Lapankuri shooting, which took place on the border between Georgia and Russia and the government at the time explained as beginning when Chechen rebels took five local youth as hostages. Later the ombudsman claimed to have proof that the Chechen fighters were there on a training mission organized by the Georgian government.

Nadirashvili said law enforcers proposed Muzayev a job, money and good living conditions for giving false testimony, but he refused and he claims that they then threatened him that he would have problems and they would send him to Russia.

Muzayev, who received Georgian citizenship in 2011, claims he has no connection to the Lapankuri shooting and cannot give false testimony about it. He said that the threats have partially been carried through, as he was fired from his job and is not allowed to leave Georgia. He has a student visa for the UK and has tried ten times to leave for London but got stopped at the border every time.

“I have Chechen origins. I have lived in Georgia for years, but no-one is paying attention to me, including Eka Beselia, head of the human rights committee, or Ucha Nanuashvili, Public Defender,” he said at the plenary session.

Nanuashvili responded to Muzayev’s statement on Wednesday, pointing out that his office has been studying the Muzayev case since February 2014 and has sent many letters to the Interior Ministry and the Chief Prosecutor’s Office about possible violations of human rights. However, the Interior Ministry has never responded to these letters and recommendations. Nanuashvili said that May 6, 2014, his office also appealed to the Prosecutor’s Office, but an investigation has not yet been launched.