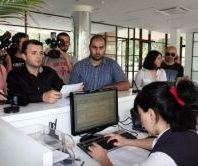 Nodar Chachua at the prosecutor's office reporting the blackmail. (IPN.)

TBILISI, DFWatch – The Georgian Ombudsman says the blackmailing of a journalist working for the opposition affiliated Channel 9 TV contains the signs of a crime.

Journalist Nodar Chachua, who used to work for one of the three pro-government channels, says he was harassed and blackmailed.

He says that on July 23 at about 18:00 he met an unknown man on Melikishvili Street in Tbilisi. The man forced him to sit in a car where two other strangers were waiting. He was verbally assaulted in the car.

Then he was threatened to be forced to take drugs and instructed to have sexual contact with one of his male co-employees, film it with a video camera, and bring them the footage.

The unknown people later approached the journalist again, and demanded that he give them information about the plans of Saakashvili’s main competitor Bidzina Ivanishvili, and all other information he had access to.

Chachua says he can remember the car’s number plates and recognized one of the persons, and that he is an employee of the interior ministry.

On Monday, the ombudsman published a brief about the case, which differed slightly. The brief says that after the journalist was forced into the car, ‘he was shown video footage reflecting his personal life and told that if he didn’t fulfill their orders they would publish this footage. As journalist notes, the strangers didn’t reveal their identities, but only explained that they were representing ‘service’ and they could create serious problems for him.”

The ombudsman’s brief says Chachua’s story contains the signs of a crime and that an investigation should be launched.

The Prosecutor says it has now started investigating the case.