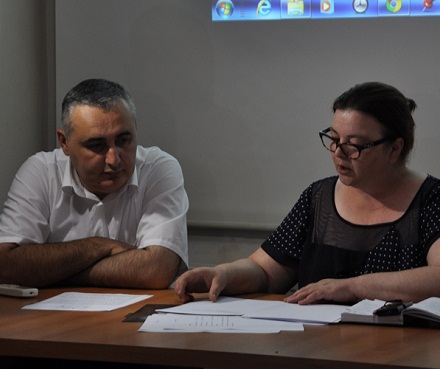 Irakli Melashvili and Ia Mamaladze from Coalition For Freedom of Choice presented the contents of a memory card belonging to a policeman in Guria. It shows that the police are making lists of people's political sympathies and which channels they are able to receive on their TV sets. (Photo: Mari Nikuradze.)

TBILISI, DFWatch – A memory card belonging to a policeman in a small village has been presented by an organization which says it reveals how authorities are systematically monitoring people’s political sympathies.

The memory card belongs to Shmagi Uratadze, who works for Lanchkhuti police district. Members of Coalition For Freedom of Choice decline to say how they obtained the card.

Head of the Association of Regional Media and a member of Freedom of Choice, Ia Mamaladze, said at a press conference Monday that the memory card contains information about the population of two villages. There are lists showing where people work, which political parties they support and what channels they are able to receive via their satellite dishes.

“This material indicates that the police is watching and collecting information about villagers’ political views, local opposition leaders and public servants as well as family members,” Mamaladze says.

According to Irakli Melashvili, also a member of the coalition, law enforcers in the regions are political policemen tasked with researching the political views of the population, which is a violation of the constitution.

Media expert Zviad Koridze says that it is necessary to address the Security Council’s Inter-agency commission and immediately start an investigation.

“Of course we consider it impossible to let law enforcement bodies conduct this investigation, as the above-mentioned information implicates them in illegal and anti-constitutional activities. We are not sure that the information will not be changed or destroyed in case of handing the electronic chip to these agencies,” claims Koridze.