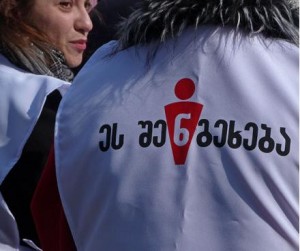 TBILISI, DFWatch–An activist group in the former Soviet republic of Georgia urges the president to veto a secret surveillance bill and plans to sue the government in the European Court of Human Rights over the bill.

The bill on secret surveillance was adopted by parliament in March at the third and final hearing and sent to the president for him to sign.

“Neither the President nor the opposition parties nor non-governmental organizations support this model.”

Non-governmental organization (NGOs) in Georgia ran a campaign five years ago called This Affects You Too (“ეს შენ გეხება”) to focus on the problem of secret surveillance during the National Movement’s rule. The campaign was revived a few years into the Georgian Dream government to call attention to a lack of progress in reining in the use of such surveillance.

TAYT has objected to several different versions of the bill because the proposals gave too much power to law enforcement agencies.

The contentious part of the bill is the system for allowing the intelligence service to keep the keys that technically give them direct access to carrying out wiretapping.

In a statement released on January 31, the NGOs emphasized that the new amendment “creates risks of unreasonable infringement of human rights.”

“We would welcome it if the president vetoed the bill. From our side, we will definitely appeal to [the European Court of Human Rights in] Strasbourg,” Gigauri said.

Human rights cases have often been brought before the ECHR in the past, and the Strasbourg based court recently temporarily suspended a ruling by Georgia’s Supreme Court in a case about ownership over the largest TV station in the country, Rustavi 2.