Kremlin linked incumbent likely to be re-elected in breakaway Abkhazia

Kremlin linked incumbent likely to be re-elected in breakaway Abkhazia 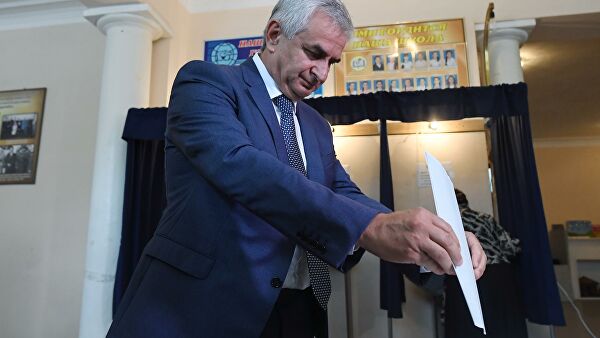 TBILISI, DFWatch–The Georgian breakaway region Abkhazia is holding elections for de facto president on Sunday. Ten candidates are vying for the seat, but none of them stand much of a chance against the incumbent Raul Khajimba, a former KGB operative and close ally of the Kremlin.

Aslan Bzhania, a former candidate proposed by a group of several major opposition parties, was mysteriously poisoned in April, and stood down due to ill health in July. The opposition suspects his poisoning might be related to his popularity among many Abkhaz and say he might pose a real threat to Khajimba’s bid for re-election.

Although Alhaz Kvitsinia, Bzhania’s replacement, is popular in some circles in the breakaway republic, he’s unlikely to challenge Khajimba in the elections, DFWatch was told by several experts on Abkhazia’s politics.

By 3 pm, over 40% of electorate had taken part in the ballot, Abkhazia’s de facto central elections committee said.

In Gali, over 60% cast their votes in the same period. However, only 872 individuals out of over 25,000 people permanently residing in Gali have right to vote due to Sokhumi’s discriminatory policies.

In the previous elections, Gali voters used to play a pivotal role in deciding election outcomes. In 2004 and 2009, Sergey Bagapsh won the elections in large part owing to the votes of Gali residents who almost unanimously supported him against Raul Khajimba as. The former was viewed by many ethnic Georgians as more “anti-Georgian”.

The same happened again in 2011, when snap elections were held due to the passing away of Sergey Bagapsh. Alexander Ankvab came out victorious, also due to unanimous support among Gali residents, where ethnic Georgians make up almost 98% of the population.

It is noteworthy that in all those elections – 2004, 2009 and 2011 – the Kremlin vehemently supported the candidacy of Raul Khajimba.

Subsequently, Sokhumi imposed new regulations on issuing Abkhaz passport that left almost the entire population of Gali without citizenship in the breakaway republic and thus stripped of most civil rights, including the right to vote.

Nevertheless, prior to the elections, the candidates tried to woo Gali residents. Raul Khajimba praised the district for being “one of the best and orderly” in the breakaway republic.

“Gali district is one of the best and orderly districts in our republic. I’ve been to many places these days and I’m saying the same elsewhere,” he said in a rare example of leniency.

On the other hand, Alhaz Kvitsinia went further, saying that it’s unacceptable that so many people in Gali do not have citizenship.

“Many may like it, many will not, but it’s my opinion that we cannot treat such a large population in this way. A child born in Gali is not eligible for citizenship. What is he or she to do? Where to get [a passport] and where to live? You can’t treat your own population like that,” Kvitsinia said at one of the meetings with his constituency.

Nonetheless, Gali residents say that feel absolutely ignored by Sokhumi and that became visible during the election campaign.

There was not any campaigning in the villages in Gali, several locals told DFWatch.