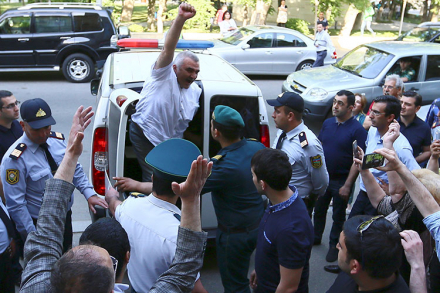 Azerbaijan’s authorities released on Tuesday Afgan Mukhtarli, an investigative journalist convicted on falsified charges. The released was ordered by the court, his lawyer Neymat Karimli said.

He immediately left the country and flew to Germany, his wife Leyla Mustafayeva said.

The release might be connected to Nowruz celebrations, Azerbaijan’s news agency Turan reports.

Afgan Mukhtarli, an active critic of President Ilham Aliyev, was abducted in Tbilisi in May, 2017 and secretly transferred to Azerbaijan where he was accused of smuggling, illegal border crossing, violence against the border guard and sentenced to 6 years in prison.

In Georgia Mukhtarli spent two years and sought asylum from the Georgian authorities.

Although authorities in Tbilisi strongly denied any involvement in abduction, his wife and a small community of Azerbaijani dissidents in Georgia suspected that local authorities either assisted or, at least, turned a blind eye.

Mukhtali’s arrest was condemned by both Georgian civic groups and internationally.