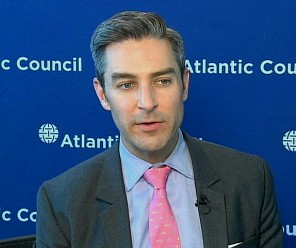 Damon Wilson, Executive Vice-President of the US Atlantic Council.

VoA: How would you asses three top US Senators’ visit to Georgia, what was its significance and a message to Moscow and Washington?

Damon Wilson: The visit of Senator McCain, Senator Lindsey Graham and Senator Klobuchar to Georgia was extremely significant. And it was very intentional. They were trying to send very clear messages. Remember, they started their trip in the Baltics, went to Ukraine and then to Georgia with the expressed intent to, first of all, reassuring our allies and partners – and in McCain’s words he sees Georgia as an ally – of sending a strong signal of the U.S. support to the countries in the region.

Second, the real audiences were in Washington and Moscow and with Moscow the intent was so clear that regardless of what you are hearing in our transition and even from the president-elect, the U.S. Congress, the Senate remains very strong in support of our allies, very skeptical and concerned about what Russia is doing and plans to exercise its role, its authority to maintain strong U.S. posture against Putin’s adventurism and support things like sanctions. And, at the same time, that message back to Washington was that the Senate has strong views on Russia and they will be heard and they will be acted on. And I think that at a time of uncertainty with our transition Senators wanted to send a bipartisan clarity of a view of we know what Russia’s doing, we want to expose us a little bit more to the American people and at the same time stand firmly by our allies and partners in the region.

VoA: What are the chances/likelihood that these senators will try to influence new administration in formulating policy towards Russia, its aggression in Ukraine, Georgia or threats to other border states?

Damon Wilson: I think it remains very uncertain as to what direction the incoming administration will take policy towards countries like Georgia. There’s a lot of work to be done to formulate that. What the Senate is doing and what these Senators are doing and saying is that we have clarity, we have strategy and we are going to exercise our authority as the congressional branch, legislative branch of the government to help shape the policy that really views Russia for the adversary that it is for U.S. interests; puts on some guard rails in terms of what the administration might consider doing vis-à-vis its relationship with Moscow, but under any circumstances being very clear that our relationship certainly with our NATO allies and the Baltic states is sacrosanct and that the U.S. Senate plans to stand firmly by Georgia, its sovereignty, its territorial integrity and everything that we support in terms of its independence.

VoA: What message did the visit send in your opinion to Georgia?

Damon Wilson: I think their message was a couple fold. One: clearly they wanted to send a signal that at a time of transition in the United States to project continuity, to project support and to project real commitment to Georgia itself, Georgia the country, and Georgia’s democracy. I think the message internally was to really support Georgia’s continuing move toward reform, strengthening, consolidating democratic institutions and economic reform and clearly the visit to those who have been displaced by Russia’s invasion and occupation of South Ossetia and Abkhazia was meant to say that we have not forgotten about this issue, we are not going to just let bygones being bygones. We are going to stand by Georgia’s territorial integrity.

If you remember the Russians have always looked at transitions to try to consolidate their gains on the ground and to start afresh with the new American President who can say ok, what was past is past, but now let’s build something new. That’s Putin’s strategy to some degree to be able to consolidate the gains, the facts on the ground and Senator McCain, Senator Graham and Senator Klubichar are making clear, no, not so fast, you are not going to be able to simply accept and do what you have done in Georgia and get away with that.

VoA: How much do you see the next US administration, supporting Georgia’ s western aspirations or help fight Russian aggression and its hybrid war in Georgia?

Damon Wilson: So, I think that good news is that there’s a much deeper understanding in Washington today of Russia strategy, particularly in the region, so there’s a much better understanding of Russia’s use of information, its propaganda wars, information wars, hybrid wars, a much better understanding of its willingness to use force as we have seen in Georgia, as we have seen in Ukraine. That’s not really an issue. There’s consensus in much of Washington and certainly on Capitol Hill that Russia’s done some pretty egregious things and the United State needs to stand up to that. That’s really an important factor here.

We have to see how administration now formulates its policy, but I think what you are hearing from our Senators is that they want to articulate some positions to help shape and influence the outcome of where the administration goes. Remember, this is the President-elect that’s committed to actually dramatically increasing and strengthening the U.S. military, to defending the American interests oversees. And I think there are some real questions about what that means and how that will play out vis-à-vis a country like Georgia.

VoA:  Are sanctions the only way to make Putin stop? And what lies ahead?

Damon Wilson: The sanctions have been an important part of U.S. strategy and what you are hearing from Congress is that the Congress plans to stand firmly by sanctions against Russia until the terms are really met and it is unlikely that Mr. Putin is going to meet those terms soon. But I think it is incorrect to say that sanctions are the only tool, or the best tool. I actually think that the strategy towards Russia that only relies on sanctions is misplaced.

We are facing a full frontal challenge to our interests across many domains, many regions, and many approaches. And I think an effective strategy towards Russia has to go far beyond sanctions. Just think that’s woefully insufficient. As Senator Graham said, perhaps it’s time to go on the offensive and not to just have the United States and our allies play defense and respond to what Russia has done. Respond with sanctions which I support, but rather let’s also think about how we go on the offensive. Maybe, Mr. Trump predictability could be an asset here in raising question marks in Moscow’s mind about what the United States could do. So, we are seeing that in response to the cyber attacks and intervention in our own elections.

The United States has many, many ways to respond. We can be a disruptive force in the region for Russian interests. So, sanctions I think are something that are important and ingredient, something that Senate will be standing closely by, but I actually think that more effective strategy requires a more comprehensive approach.

You can follow Anna Kalandadze, head of VOA Georgian section on twitter at @anavoa or find more interviews via voanews.com/Georgian.  The Georgian-language interview first appeared on VOA.