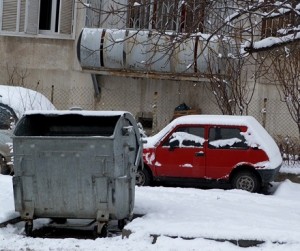 Authorities in Tbilisi recently made the monthly garbage fee dependent on the electric bill, which has led to a unpleasant surprise for those who rely on eletric heaters these days. (Photo: Mari Nikuradze.)

TBILISI, DFWatch – Among all the other problems the weather is causing, Tbilisi citizens have one more worry: Their garbage fee has increased dramatically.

A few months ago, a law amendment made the municipal garbage fee dependent on the electricity bill, so the more electricity people used, the higher the monthly garbage fee.

Whereas those in the regions of Georgia have firewood to warm themselves on, there isn’t that many alternative energy sources to those in the capital; it’s either electric or gas. The price of one kilowatthour of power is 0.16 tetri. According to the new law, each household has to pay 0.05 tetri on top of this for garbage collection, per kilowatthour of electricity.

Tbilisi residents joke that they need to cut down on their electric bill because it produces too much garbage.

Before the new law, garbage collection used to be cost 2.50 lari per person per month.

Shortly after the law came into force, someone asked on Facebook people for feedback about whether the garbage bill had increased for them. 367 people said yes, payment of cleanup has increased in their families; 245 said it significantly increased, while only 8 answered that they aren’t paying more than they used to. 9 doesn’t know.

Tamar (46) is living with her husband and two children. She says that her fee is increasing as time passes by and winter gets harsher.

“Our house is not really big; however it’s still very cold. It’s impossible to warm a whole house and we are trying to get our rooms warmer,’ she tells DF Watch. ‘Gas heaters are wasting a fortune. We used to heat the house with electric heaters, but since the law was enforced, I am having to pay more and more.”

She says the first month she only paid five lari more than she used to, but now it exceeds 15 lari.

She isn’t working, neither her son. Her husband has a salary which is barely enough to pay for fees and food. Fortunately, her daughter has a job now, she says.

Tsiala has refused to use electric heaters this winter.

“Yes, gas heaters are expensive to use, but for our family it’s cheaper to use them rather than electric heaters adding additional payment for this garbage stuff.”

Irakli Alasania, the leader of the Free Democrats party, appealed today to the Tbilisi mayor regarding this issue.

“I appeal to Gigi Ugulava, at last now he should think of people and in this frost days of winter, when people in Tbilisi most of all need to use electricity for heating; he should make a decision to separate the garbage fee from the electric bill,” reads a statement released by the party’s press office.

Zurab Abashidze and Viktor Dolidze, who are representing the Free Democrats in Tbilisi City Council, will tomorrow put forth this initiative to the Tbilisi mayor.