Georgia hit by up to two meters of snow, schools closed

Georgia hit by up to two meters of snow, schools closed 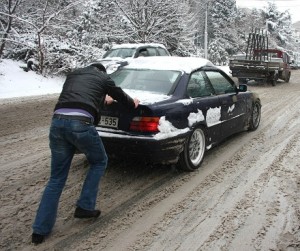 15 cm of snow was enough to cause dangerous situations all over Tbilisi Wednesday. (Photo: Interpressnews.)

TBILISI, DFWatch – Snowy weather is creating difficulties in the former Soviet republic of Georgia. The whole country is currently covered with up to two meters of snow, but the transit of goods east-west is flowing normally.

The international airport in Tbilisi says their flight schedule is not affected, and the ariport is operating normally. No flights have been delayed.

Around 700 hundred tons of road salt has been spread in the streets of Tbilisi. The 15 cm snow cover made for many bottlenecks in this morning’s rush hour in a city where traffic frequently is jammed.

In Rikoti, which divides western and eastern Georgia, the tunnel is open in intervals to let traffic through. It is currently undergoing maintenance works. Heavy transport vehicles would otherwise have had to cross a winding mountain road, where the snow cover now is more than two meters.

The only places road traffic is affected is in the Jvari pass, where the snow is 160 cm high, and in the Gombori pass. Busses and heavy transport is not allowed through.

Driving is restricted on the central roads several places in Kakheti, eastern Georgia, where the level of snow is not more than 70 cm.

Clearance work is also underway on the road between Tbilisi and Rustavi, a small city south of Tbilisi.

Schools and kindergartens have been cancelled for several days due to the bad weather.