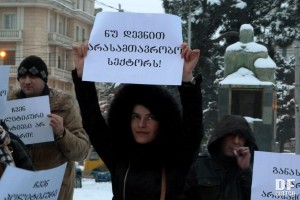 New rules effectively cuts off the foreign funding for election observers and civil rights groups in the former Soviet republic of Georgia. The Saakashvili government believes that they are trying to affect the outcome of the election. (Photo: Mari Nikuradze.)

TBILISI, DFWatch – The government of Georgian leader Mikheil Saakashvili has begun an unprecedented move to cut off the foreign funding of civil rights groups and election observers, because it believes that the groups are trying to affect the outcome of the election this fall.

The country’s Chamber of Control has started financial audit of organziations far outside of traditional politics. Experts are calling it illegal and call for the government to change its policy.

One of the groups now targeted under tough new rules is known for having contributed observers during the disputed elections in 2008.

Natia Mogeladze, the head of the financial monitoring group of the CoC said her agency is initiating financial declaration monitoring of non-governmental organizations (NGOs) and that a request is already sent to two organizations. These are the Republican Institute and Akhali Taoba – Akhali Initsiativa.

Natia Mogeladze, head of the financial monitoring unit of the Chamber of Control. (Photo: Maestro TV.)

Mogeladze explains the Chamber of Control demands this on the grounds of the law which parliament adopted at the end of December and which applies a number of restrictions and prohibitions to not only political parties, but also legal endities and individuals who are directly or indirectly connected to political parties.

When the law was adopted, it lead to criticism and resistance from the opposition and society in general; because there is a sense that no organization will be able to work under such conditions, because all restrictions about party financing will apply to them too. They will for example not be able to receive financing from foreign citizens.

After this protest the government explained that these principles wouldn’t apply to groups that are called non-governmental organizations and make up an important part of organized public life in post-Soviet countries.

But on February 8 Mogeladze stated that she demands to monitor these organizations, because ‘persons associated with them are still involved in political activities.’

Both subjects have three days to present a report of their finances. 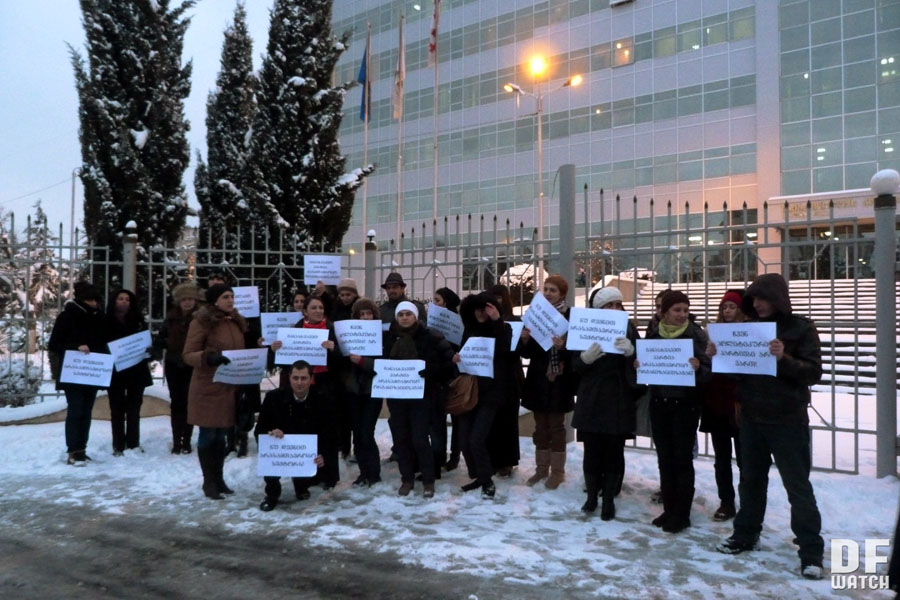 Transparency International and International Society for Fair Elections and Democracy were among the groups that protested outside the Chamber of Control Wednesday. They might be next in line. (Photo: Mari Nikuradze.)

Members of the Georgian Republican Party are among the founders of the organization called the Republican Institute.

Davit Zurabishvili, representative of the Republican Party, says that they will present a report to the Chamber of Control within three days, but the Republicans avoid to specify who has financed the Republican Institute and by what amount.

Akhali Taoba – Akhal Initsiativa is mostly known as an organization which conducts election monitoring. Representatives say it is being financed from the U.S. State Department and the NATO Center and that the demand about financial reporting is unclear to them.

Non-governmental organizations consider the CoC’s decision unacceptable and held a protest in front of the CoC building in Tbilisi Wednesday.

Eka Gigauri, chair of TI Georgia, said there is no information about whether Akhali Taoba Akhal Initsiativas has been directly or indirectly connected with any party.

“The fear we had that the government could use this law against NGOs came true. We expect explanations from the Chamber of Control, why the law is applied NGOs,” Gigauri remarked.

Nino Lomjaria, head of ISFED, thinks the law can be applied to any organization due to the fact that it’s unclear. She says the way the Chamber explains its request to Akhali Taoba Akhal Initsiativas is unacceptable.

“This is an unclear explanation of the law, and such a decision sets a very bad precedent, which will apply to all organizations. We not only protest this decision, but we demand to have it recognizes as illegal,” she added.