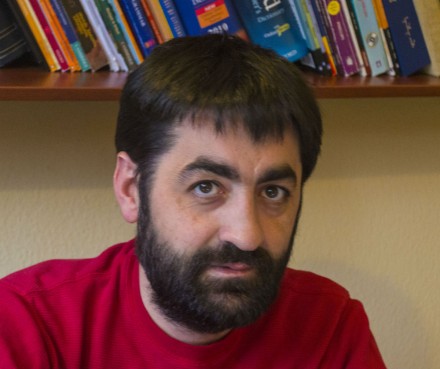 DF Watch: Can you tell us about the history of the radio?

We decided that one of easy and early ways to do it would be a web-based radio broadcast with daily news on ongoing events in Georgia. Up to 70% of our content is translations from already existing Georgian websites. Another 30–35% is an original material that we make ourselves. We go to press conferences, cover Georgian politics, social and economic development, cultural events, and others. We started off producing those and little by little gained more parties that became involved in the project — both local students and already functioning journalists, as well as we attracted interest from Georgia’s donor community.

By October 2015, we were lucky enough to start to cooperate with a Javakheti–based radio called Radio Nor, which has an FM frequency. It seems like they had issues with their content, so on the one hand we were producing content, and on the other hand they had a frequency which needed to be filled in. We signed a memorandum of understanding and started broadcasting.

On a daily basis now, we are broadcasting in Ninotsminda and parts of Akhalkalaki. In the next couple of days we’re hoping to have a similar type of cooperation with a radio station in Akhaltsikhe which is also interested in Armenian-language content.

The original idea of having our own frequency isn’t as important now, since there are already existing radio frequencies now that are interested in broadcasting us. In addition, we started developing a website which has already been functioning for two months. Our name is Aliq Media, where aliq means ‘wave’. We also started producing mostly web-based video content, which we’ve been focusing on for the last couple of months.

In January 2016, we got out first financial support approved by the National Endowment for Democracy (NED). As of February, we’ve been able to fund ourselves thanks to this grant.

DF Watch: How popular is the radio among the population of Samtskhe–Javakheti?

Arsen Kharatyan: We don’t have a monitoring system, but we’d be interested to do it in a near future. Our online content is often quite popular based on the number of ‘likes’ and views. The numbers aren’t large — it’s a couple hundred — but we’re starting to realise that a lot of Armenian-language media, both in Armenia and in Georgia have started picking up our stories.

Internet penetration isn’t high in Javakheti, but it’s significant and it’s only going to grow. We are targeting some of the popular outlets there through mobile applications for younger population.

DF Watch: What are the most burning issues you’re trying to cover?

Arsen Kharatyan: We are trying to not to cover Armenian-community events. We are trying to touch upon general Georgian developments, from visa liberalisation to issues that can be of concern to the population of Javakheti, such as Armenian public officials having investments in Javakheti, which creates a chain reaction and can lead to negative consequences. Other topics include legislation changes or issues related to minorities.

One of our priorities is to cover daily issues, such as traffic situation or the south–north road, which is of interest for people travelling to Russia through the mountainous zone. We also dedicate a lot of our coverage to European integration, the Association Agreement, and what it means for the region, especially knowing that there is a lot of misinformation going on. We talk about Russia’s soft power and its engagement here.

We’re trying to develop enough legitimacy by a coverage that is as objective as possible, so we become a viable and trusted source for those interested in what is happening in Tbilisi and elsewhere.

DF Watch: How do you judge the government’s policies towards minority-language media and its efforts to provide quality information to minority groups — in this case Armenians?

Arsen Kharatyan: There is a newspaper called Vrastan (‘Georgia’ in Armenian) which is funded by the government. It has a long tradition, but it’s published only once a week and it contains mostly official information. There is a twelve-minute quota in the national television for four languages: Armenian, Azerbaijani, Abkhaz, and Ossetian. Every day, on public television and radio, there is a twelve-minute broadcast in Armenian about developments in Georgia.

In Tbilisi proper, there are two or three other Armenian community organisations that produce newsletters: the Armenian Community of Georgia which produces brief descriptions of daily events and the cultural centre Hayartun which functions in the auspices of the Armenian Diocese of Georgia.

In Javakheti, there are a couple of websites, some also funded by Western organisations, including NED: Jnews in Armenian and Russian, Samkhretis Karibche (‘Southern Gates’), and Parvana TV [named after the Armenian name of Paravani lake] which is a local television in Javakheti.

These independent entities try to do a solid job, but definitely not enough to cover what is happening in Georgia in detail that is needed.

DF Watch: What are the greatest challenges to your work in Samtskhe–Javakheti?

Arsen Kharatyan: We have to realise that we don’t work on the ground in Samtskhe–Javakheti. We produce news and media content in Armenian which is then aired in Javakheti — and elsewhere by means of the internet. We have ten people working in our office and we permanently are in the process of developing. So far we haven’t experienced any significant challenges. We haven’t felt any pressure connected to what we do, we haven’t felt any type of censorship, nor have we been attacked or forbidden to do anything.

However, as we move forward, the elections are coming up and as many other journalists we will probably be under some kind of incentive. We don’t have the experience yet, so I can’t say more. Other than that, our main challenge is was to sustain ourselves without the help of grants.

DF Watch: Recently, we’ve observed an increase in incidents that targeted the Armenian community in Georgia. Do you also report on such issues?

Arsen Kharatyan: There were examples of the Armenophobic behaviour, mostly on social media and some of the television channels. We were extensively covering the processes where a small Youtube dance [a reference to a video allegedly showing an Armenian dance group performing a Georgian dance, which was widely shared in Georgian social networks] could cause a whole chain reaction of becoming an anti-Armenian notion. We report whenever it comes to any form of Armenophobia in the country.

DF Watch: Have you noticed any organised tendencies in Armenophobic coverage in the media?

Arsen Kharatyan: When this dance became a big deal and one TV channel conducted a so-called investigation talking about how a Georgian dance can be portrayed as an Armenian one, the Armenian dancers had to explain themselves. They issued a letter saying that they never claimed they were performing an Armenian dance. At the same time, another TV channel showed a piece about Abkhazia saying that local Armenians weren’t supportive [to Georgia’s territorial claims].

We don’t know whether there was one ‘centre’ behind it or it was a chain of unrelated events which coincided. It definitely worries us. We believe that Armenophobia needs to be recognised as such in Georgia and has to be dealt with as such. We hope that the Public Defender’s Office and other human rights organisations, both state and non-state entities, will recognise it as a problem. I personally believe, not speaking on behalf of Aliq Media, that it is an issue that needs to be recognised and dealt with.