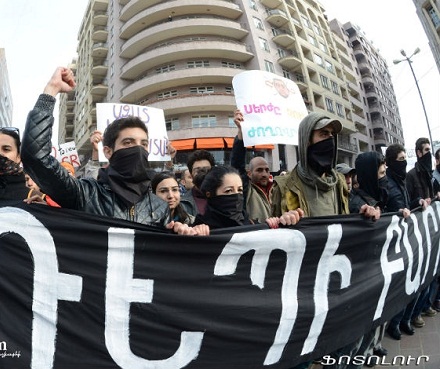 Police have detained a number of protesters, but the protests continue. Among the detainees are members of the political parties Free Democrats, Heritage and Aizan.

Protesters tried to break through the police line and reach the president’s residence.

Participants of the rally are against Armenia joining the Eurasian Custums Union and the visit by Vladimir Putin, who is in Armenia for the first time since 2008.

Meanwhile, the Russian and Armenian presidents opened a Russia-Armenia regional forum. Putin said that Russia, Kazakhstan and Belarus already benefit from being members of the Customs Union, which is to be transformed into the Eurasian Union.

He said Russia plans to strengthen its position in the Caucasus, including Armenia.