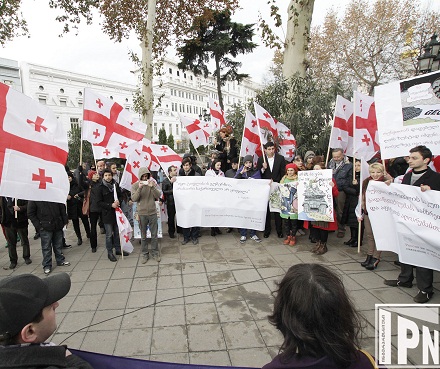 A counter-demonstration to show support for Georgia's western aspirations drove away a small group advocating to cancel the application for NATO membership. (Interpressnews.)

TBILISI, DFWatch — An attempt at demonstrating against Georgian NATO membership was Sunday quashed by a counter-demonstration.

The two rallies took place on Pushkin Square in the center of Tbilisi and started with a call the same day to support friendship with Russia, without NATO aspirations. 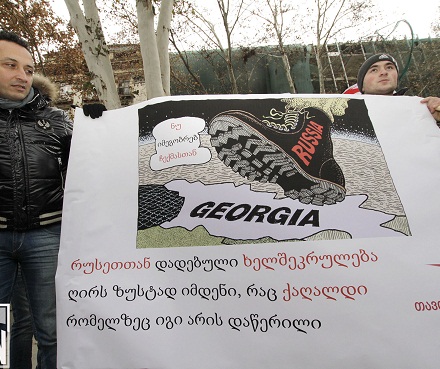 Behind the call, which went out on social networks, were two non-governmental organizations called Earth is Our Home and Peace Committee of Georgia. They explained in a statement that they consider the alliance a US-controlled military and political organization which is threatening Russia’s sovereignty and deploying military infrastructure close to its borders.

“The last 20 years’ tragic history showed that Georgia under no circumstances should be a tool in the hands of the US and NATO. Such a role has been a disaster for our country,” the groups write.

The demonstration was themed ‘Georgia needs friendship with Russia! No to NATO!’, and organizers had planned to hold up a large poster with a crossed out NATO symbol. 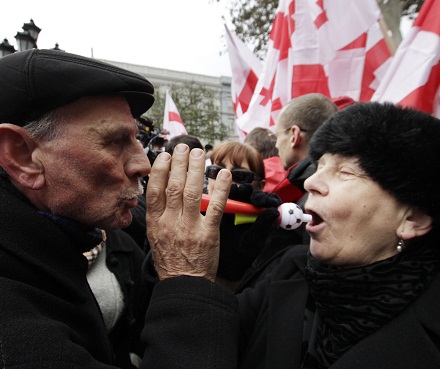 “We are for being friends with the US, but only together with Russia," said this man. (Interpressnews.)

But when the plan became known, a counter-demonstration started being organized by people including well-known public figures, students, and journalists, politicians from the former and current parliament. They timed it to one hour earlier, at the same place as the first demonstration.

Participants of the counter-rally agreed to avoid physical or verbal confrontation.

“If we want NATO and we do not want violent Russia, let’s show our position at this rally and express our protest by whistling,” the invitation text of the second event reads.

Tens of people arrived for the counter rally, bringing Georgian and US flags and posters, many of which had written on them quotes by Russian President Vladimir Putin: “There was a province of Tbilisi, there hasn’t been any Georgia”; “Russia won’t change its decision regarding recognition of Abkhazia and South Ossetia”; “Georgia’s future is NATO.”

“We want to once again make people understand that we won’t let Georgia become closer to Russia, the occupier country, and forget everything that Russia committed against Georgia,” one of the participants told journalists on Sunday.

The participants at the pro-NATO rally claim a majority of the Georgian population wants EU and NATO-integration and this should be the goal of the country, because Russia never wanted independence and freedom for Georgia.

When people came to attend the anti-NATO rally, the flowers they had brought were trampled on and there was a scuffle and verbal confrontation.

“As a result of the latest investigations [against officials in the Saakashvili regime], 83 percent of people support friendship with Russia. We are for being friends with the US, but only together with Russia. Relations with Russia and former Soviet countries is Georgia’s future,” one man told News.ge.

The counter-demonstrators, among which were seen several well-known figures in the National Movement party, eventually pushed the anti-NATO groups away from Pushkin Square to the sound of whistles and sang the Georgian national anthem waving flags.