Another Georgian citizen killed in Syria

Another Georgian citizen killed in Syria 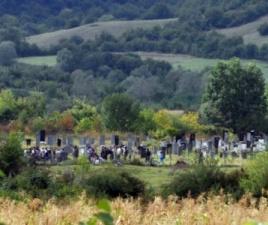 Mr Bugiev arrived to Georgia via Azerbaijan during the Second Chechen War in 2000 and was granted refugee status. However, he lost it due to failure to comply with the duty of systematic re-registration.

In 2003 he was detained in the village of Omalo in Pankisi Valley, where his wife was from, under charges of illegal crossing of the border. After his release, he re-registered as refugee and legalised his stay in Georgia.

Mr Bugiev’s nameis connectedto the shootout in Lapankuri in August 2012, during which seven Chechens and Kist fighters and three employees of Georgia’s Ministry of Defence died. The fighters were travelling in a jeep registered on Vakha Bugiev’s name.

According to the 2014 report released by the Public Defender’s Office, the fighters were brought to Georgia by the government of the United National Movement and were travelling to Daghestan at the time of the shootout. The exact circumstances of the tragedy have not yet been fully investigated.

Mr Bugiev left Georgia in 2015, leaving behind his wife and three children in the village of Tsinubani in Pankisi valley. It is unclear how he managed to cross the border given the fact that he was under surveillance of the State Security Service.

‘I knew that he lived in Tsinubani, had a wife and children, I think, he participated in several military operations in Syria and I learned today that he was killed during the bombing’, Khaso Khangoshvili, member of the Council of Elders of Pankisi valley told Rustavi 2.

ICK writes that Mr Bugiev is the 15th inhabitant of Pankisi valley who died while performing military activities in Syria. In January, Ramzan Pareulidze and Mukhmad Turkoshvili were reported killed while fighting in the ranks of the Islamic State.