Another EU visit: Rompuy expected in Tbilisi, after Hollande

Another EU visit: Rompuy expected in Tbilisi, after Hollande 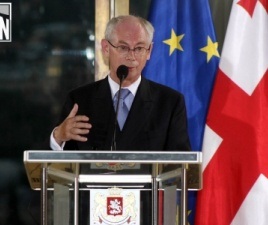 It will be Rompuy’s second trip to Georgia, which is seen by Georgian officials as a sign of the EU’s ‘special interest’ towards the country.

According to the Georgian Foreign Ministry, Rompuy’s second visit is a demonstration of EU’s firm political support for Georgia.

The goal of the visit is to discuss the political situation in Georgia, stability and security and cooperation with EU ahead of the signing of an Association Agreement between the EU and Georgia, which according to Georgian officials will take place no later than in June.

Rompuy will meet on Wednesday with President Giorgi Margvelashvili and Prime Minister Irakli Gharibashvili and deliver a speech at the Europe House in Tbilisi.

The president of the European Council last visited Georgia in the summer of 2012 before the parliamentary election.

Before arriving to Georgia, Rompuy visited Moldova to meet with the president, prime minister and speaker of parliament. Before leaving, he said he is looking forward to welcoming Prime Minister Leanca in Brussels on 27 June to sign that country’s Association Agreement with the EU.

The last few weeks, Georgians have been witness to a steady stream of high level guests visiting the country. In late April, the German and French foreign ministers, Frank-Walter Steinmeier and Laurent Fabius, came to Tbilisi, followed in early May by Turkish and Azerbaijani presidents Abdullah Gül and Ilham Aliyev, and then by British Foreign Secretary, William Hague.