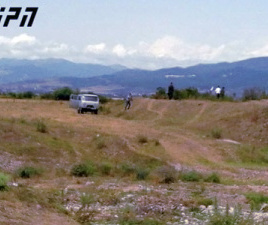 TBILISI, DFWatch–Russian soldiers on Wednesday removed a Georgian flag at the border with the breakaway region South Ossetia.

On June 10, Russian troops guarding the perimeter of the breakaway republic placed two news border signs near the villages Tsitelubani and Orchosani, up to 1km inside territory previously under the control of Georgian authorities.

A few days later, a group of journalists demonstrated at the site. They removed a sign and trampled on it, and placed a Georgian flag there instead.

A group of seven armed persons, among whom were Russian soldiers and Ossetian special units, came to the spot on Thursday to remove the flag.

“Here is the state border of South Ossetia, and if you don’t refrain from moving here, we will take measures,” Robert Gazayev, from the de facto government, who was among the group, told journalists.

Shalva Enukidze, Head of the Interior Ministry’s Department for Analysis, later explained that a group of seven people wanted to check banners installed on July 10. He told Interpressnews that Georgia informed EU’s Monitoring Mission about activity of the group.

He said Gazayev was leader of the group that removed the flag, and that he heads one of the border service departments of South Ossetia.

“The installation of new demarcation signposts along the administrative boundary line of Georgia’s breakaway region of South Ossetia has led to tension in the area, with potentially negative effects on the local population, their livelihood and freedom of movement.”

South Ossetian spokesperson Murat Jioev yesterday denied that the border had been moved. He claimed all the boundary signs have been placed on the South Ossetian side and at least 50 meters away from the line. Jioev called what has happened the last few days ‘summer hysteria’, and drew comparison to a previous demonstration held in Dvani nearly two years ago. He accused activists from the NGO “Free Zone” of provocative actions.

Considering the latest developments in this area, a special meeting of the Incident Prevention and Response Mechanisms (IPRM) is planned the coming Monday in Ergneti.