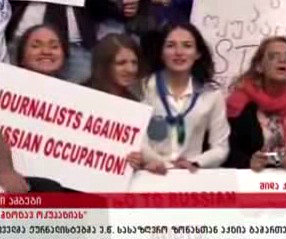 The three hour rally featured journalist from Georgian newspapers, TV and other media outlets forming a human chain and singing the Georgian national anthem as colleagues on the other side of the barricades watched the event, reporting for Ossetian media.

Rally participants say they want the 20-year occupation to be stopped. They called on their colleagues in the breakaway region to join them in saying that no borders are needed.

Locals also joined the rally, which had the slogan ‘No to creeping occupation.’ After the rally, the journalists went to the houses of locals to speak with them about their problems.

They also went to see three storage houses recently dismantled by the owners after they were warned that the border will soon be moved so the houses end up on the Russian-controlled side. The owners have now finished emptying the houses of all the things that were stored there.