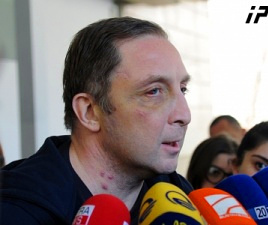 TBILISI, DFWatch–An opposition politician who was shot last week left the hospital on Tuesday and made his first statements to the press.

Alexi Petriashvili, former member of government and party secretary of the opposition Free Democrats, said he didn’t know the attacker and that he has never had a conflict with him.

He avoided to ‘speculate’ about the motives of the attack, and left that up to the investigation to reveal. He wants investigators to find out who ordered the attack and said it is important for the future of the country.

“So that in the future people wouldn’t dare to take money and sacrifice a person,” Petriashvili said, expressing hope that the case will be solved soon.

“Despite five shots, perfect hammer work and baseball bat hits, I am a in remarkable sporty condition,” he told journalists.

He said he doesn’t know the suspect who was arrested yesterday, and never even met him before.

“I worked on the association agreement [with the European Union] and this person worked robbing small loan shops. We had never met, I haven’t even heard of his name,” he said, adding that the suspected attacker was not wearing a mask and would have been easy to recognize if it had been someone he knew.

Petriashvili said he never lost consciousness during the attack and remembers every detail, such as who held which weapon.

Earlier, the suspect’s lawyer told journalists that her client claims he had a personal dispute with Petriashvili and that the attack was not politically motivated.