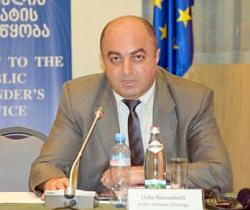 Ucha Nanuashvili underlined that discrimination against women in labor relations is still a challenge for Georgia. The challenge is wrong visions in the society as well as low number of special measures in this direction.

“Georgia needs more women in politics, more voices of women in decision-making, peacebuilding and processes in the country’s democratic development. We often hear that women do not want to be engaged in the country’s political life, which is not true,” the ombudsman writes. This may be because those people haven’t seen women in Georgia as human rights activists, leaders and active women living in villages changing lives in the community every day, he adds.

The ombudsman believes that there should be a women’s quota in parliament in order to overcome inequality, and writes that it is necessary to improve labor relations, prevent violence and discrimination and to develop the idea of equal rights in practical life.

“We need more women in politics.”

On March 8 last year, a group of feminists held a demonstration to promote the idea of more women in parliament.

The group plans a demonstration in Tbilisi today dedicated to better labor condition for everyone.