TBILISI, DFWatch–A former member of government and secretary of an opposition party was shot by unknown attackers on Saburtalo cemetery on Friday afternoon. His injuries are not life-threatening. 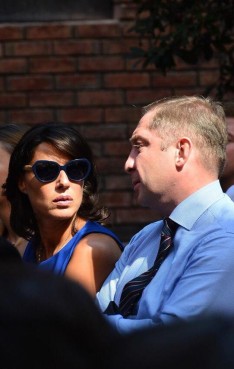 Aleksi Petriashvili was shot at and wounded at the Saburtalo Pantheon cemetery in Tbilisi on Friday afternoon. He is former minister for Euro-Atlantic integration (2012–2014) and general secretary of the opposition political party Free Democrats.

The Free Democrats split with the ruling Georgian Dream coalition in November 2014 and has since remained in opposition. It was funded by Irakli Alasania in 2009 as an opposition party to the United National Movement’s government and its leadership consists predominantly of former diplomats.

Mr Petriashvili was brought to Tbilisi’s Republican Hospital. According to a statement made by the hospital’s general director Avtandil Imedadze, his condition is stable and he’s currently undergoing a surgery. According to Mr Petriashvili’s wife, Eka Mishveladze, her husband’s life isn’t in danger.

Mr Imedadze told journalists that the patient has received three gunshot-inflicted wounds: two in the legs, and one in the spinal area. He has also received head trauma, apparently inflicted with blunt objects.

The Ministry of Internal Affairs issued a statement, according to which Mr Petriashvili was physically assaulted by unidentified attackers and received gunfire-inflicted wounds in the legs.

According to a preliminary report, at the time of the attack Mr Petriashvili was visiting the grave of late diplomat Levan Mikeladze, his former colleague and mentor, together with three friends, who are currently being interrogated by the police.

Maia Panjikidze, member of the Free Democrats and former minister of foreign affairs, told journalists that Mr Petriashvili visited Levan Mikeladze’s grave alone and that she didn’t know who the three man who were being interrogated by the police were.

Leader of the parliamentary majority Zviad Kvachantiradze suggested that the motive for the attack could be personal revenge, but he hasn’t provided any details.

‘I think that society is aware of previous developments… This is purely a criminal act, which is currently being investigated. I am convinced that the person who committed this act and the person who ordered it will be held responsible’, Mr Kvachantiradze said.

In 2012, Mr Petriashvili wrote an opinion piece for DF Watch about Georgia’s accession to NATO.