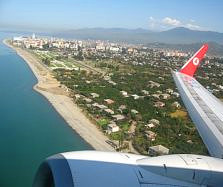 Guram Jalaghonia, head of the Civil Aviation Agency, told Business and Political Insight (BPI) on Monday that the interest in the Adjara region in southwest of Georgia is growing every year, as is the number of passengers at Batumi International Airport.

Currently, the companies Georgian Airways, Turkish Airlines, Belavia and Yanair offer flights to and from Batumi.

Jalaghonia said that Air Arabia, Scat, El Al Israel Airlines, ARKIA and Dniproavia plan to launch flights out of Batumi from next year and the airport operator TAV Batumi is negotiating with them together with the local government and the tourism department.

According to the Aviation Agency, the number of passengers from Iran to Georgia was always, but the numbers also reflect visa regime which Georgia had changed for Iranian citizens several times.