Again the sides meet in Georgia’s most touchy debate

Again the sides meet in Georgia’s most touchy debate 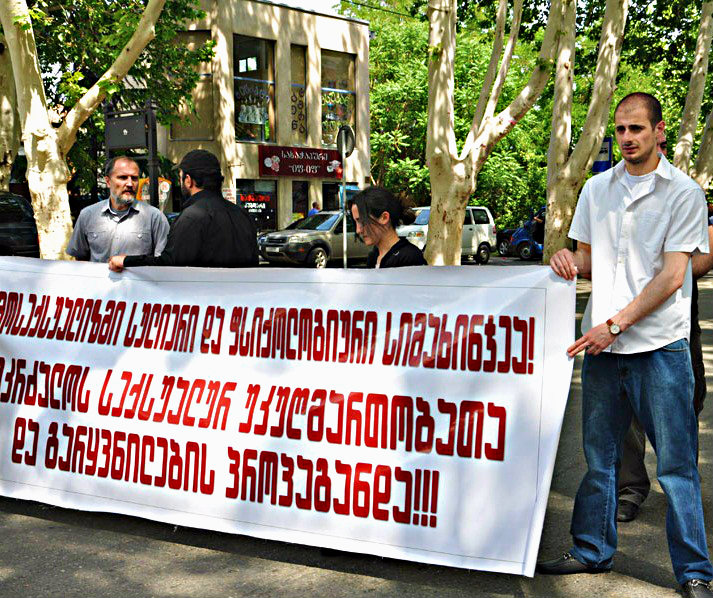 TBILISI, DFWatch–Two small counter-rallies were held at the Prosecutor’s Office on Saturday in Tbilisi.

The organizers of one rally, ‘The law is supreme’, were the same as those who organized ‘No to Theocracy‘ on Friday.

Meanwhile members of the National Front continue to demand a ban on what they call gay propaganda.

This time there were about ten representatives from the National Front while a few dozen people joined the rally entitled The law is Supreme.

The Interior Ministry had been expecting more people to show up, as from earlier on Saturday several layers of police corridors were organized in front of Prosecutor’s Office, while the center of the place was completely surrounded by police.

The two rallies were held peacefully and without any incidents. National Front representative Evgeny Mikeladze used a megaphone during the hour the rallies lasted to shout various messages in the direction the other rally.

In his opinion, the other group is trying to blame the events of May 17 on the Georgian church and its clerics.

Participants of the ‘Law is supreme’ rally demand a proper investigation of every violent incident on May 17 and after, and also that the court must treat all perpetrators equally, regardless of whether they are clerics.

The rallies ended after one hour. When the police was about to leave, a taxi by accident hit one of the policemen, who broke his leg and injured his head. He was taken to the hospital.

Later the same day, the organization Identoba and the online publication Reactori reported that three persons were leaving the rally when three other guys attacked them and beat one underage boy.

Three men who acted aggressively started first scolding them and then attacked. One girl ran into a nearby shop, while another one went to call the police. Meanwhile the three beat the 16-year old boy, but they ran away before the police arrived.

The organization Identoba called on LGBT people to avoid public places and to communicate with media in order to avoid physical attacks, which has become a trend since May 17.