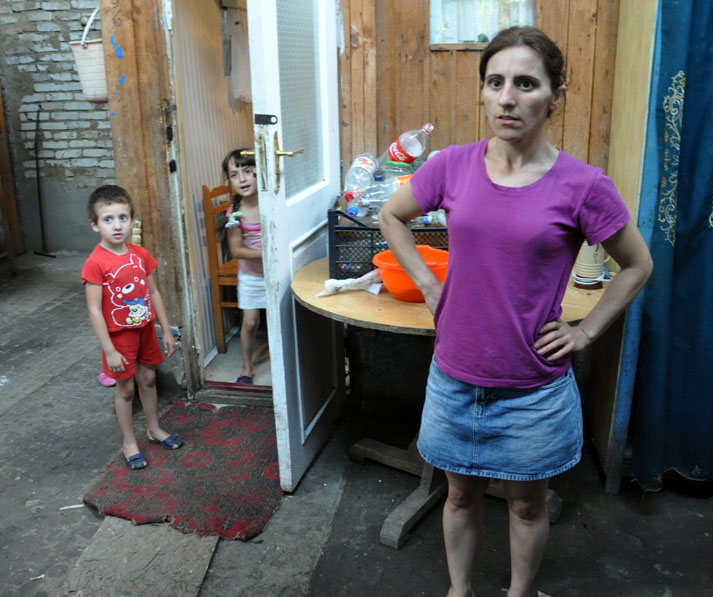 Refugees from the war in Abkhazia twenty years ago are still living in a derelict hospital kitchen building. (DFWatch photo.)

TBILISI, DFWatch–Twelve families of refugees are living in the kitchen building of a former hospital in Zugdidi, a town that lies not far from Abkhazia, the breakaway region they fled from.

For 16 years, they have been living in the derelict building, waiting to be moved to a new house. Most of the families come from Gali and Ochamchire, two regions in Abkhazia, which they had to leave during the war about 20 years ago. When they came to Zugdidi, they first lived in the 6th secondary school building, but were evicted.

“We were in the streets, while our husbands started to look for a new place for us to live,” Irina remembers. “After days of searching they came and told us that they had found an old and destroyed building, which we could cover with wood and other materials and live in for a while, until the government gives us a place to live. We have lived here since. It’s been 16 years already.”

During bad weather it is raining just like outside in the house. The roof needs rehabilitation, but its residents cannot afford it.

“Fortunately we have really kind neighbors and they shelter our children during rain or when it is really cold in winter.”

There are 22 children living in this house. Two of them are disabled, while four year-old Mishiko has leukemia. His treatment used to be covered by health insurance, but his mother Irina Sichinava says the financing was suspended three months ago and now they don’t have money to continue the treatment. Her son needs regular controls for the next five years.

Last year, government representatives came to this house and told its residents to get ready, pack and prepare to go to a new house in Poti, a city on the Black Sea. However, the next day they were told that all apartments in the new housing complex were already taken and they had to wait for another alternative house.

“Then they told us that they would take us to Batumi. Promised that we would be the first ones to settle there. We were waiting with our suitcases packed. Again, they came and told us that there was no place left for us,” one of the residences says.

Now they want to be resettled here in Zugdidi, as many of them have already found jobs, and they have relatives here.

Irakli Kochua, head of Adjara Zemo Svaneti territorial body of the refugee ministry, explained to journalists of media-tour, which is organized by Civil Development Agency (CiDA), that construction of eight buildings is in progress right now in Zugdidi and it must be finished by 2014. He said that about 2 000 families of refugees live in Zugdidi, while new houses will locate 256 of them, but first residential apartments will be given to those who need it most. The former hospital kitchen is on the list, as well.