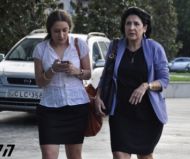 TBILISI, DFWatch–The Appeals Court in Georgia Tuesday upheld a decision by the Central Election Commission (CEC) to not allow Salome Zourabichvili to register as a presidential candidate.

The CEC’s decision, which remains in force, reasoned that the constitution of Georgia prohibits dual citizens from being president.

Zourabichvili, who was Georgia’s first foreign minister after the Rose Revolution, is a citizen of France and Georgia, but her lawyers claim that she still has a right to participate in the election. If she should win, she would then have to give up her Franch citizenship.

Upon leaving court, she showed journalists an application that she had delivered to the French embassy to renounce her citizenship of that country the day of her being elected president. Explaining that she does not intend to renounce her French citizenship now, she tore up the document.

“I consider that in this country there are many emigrants who have dual citizenship, and it is not correct to be refused for that [reason] in today’s Georgia,” Zourabichvili said, according to Interpressnews.