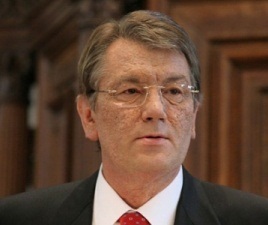 Viktor Yushchenko, former president of Ukraine, wants to pay back USD 400 for a hot bath that was paid for by the state during Saakashvili’s government. (Interpressnews.)

TBILISI, DFWatch–Viktor Yushchenko, the former president of Ukraine, has jumped into a political squabble in Georgia by saying he is willing to pay back USD 400 he was given for a visit to one of Tbilisi’s hot baths.

The ex-president says through his spokesperson that he didn’t even visit the bath that was paid for.

Georgian Dream coalition members a few days ago published documents that had been declassified by the prosecutor. They showed questionable expenditure of state money under the government of President Mikheil Saakashvili.

Among the documents were expenses for bath services provided for Yushchenko on April 6, 2011, after he left as president of Ukraine. The document presents a list of services and items which were provided for guests, like soap, towel, slippers, tea, mineral water and honey massage.

On Thursday, Ukrainian media quoted Yushchenko’s spokesperson Irina Vanikova saying that the ex-president is ready to pay USD 400 and honey, which was ‘probably’ provided by the Special State Protection Service in 2011. According to Vanikova, Yushchenko wasn’t even in Georgia on April 6, 2011.

She said the former president is ready to give the money ‘as humanitarian assistance.’

“I hope the USD 400, which we are ready to pay as humanitarian assistance, will help Georgian MPs to fight against corruption and won’t be ashamed of calculating the amount of money for soup and tea. We are also willing to send one can of honey, soap and shampoo,” she added.

There were no reports in the media about Viktor Yushchenko visiting Georgia in April, 2011, nor was it announced by the government.

Georgian media on Thursday quoted Luiza Gogodze, Deputy Director of the bath mentioned in documents published on April 17, who confirms that the ex-president of Ukraine really visited their bath ‘two or three years ago.’

“He was at the VIP bath,” she recalls. “I don’t exactly remember the date, but I should say he was fond of our services. He drank tea and received a massage along with other procedures.”

Meanwhile, the Defense Ministry informed that the company Foodline Georgia Ltd, the manager of which is the husband of Irina Imerlishvili, a member of parliament for Georgian Dream, has been thrown out of a state tender to provide the ministry with food.

April 17, Irina Imerlishvili was the one who published documents of the cost of registration. The same day, Giorgi Kandelaki from the parliamentary opposition accused her husband of being appointed as director of Foodline Georgia, which, he claimed, won a tender of 34 million GEL for the Defense Ministry.

However, the Defense Ministry informed that April 17, the same day, Foodline Georgia was thrown out from the tender, which has not yet finished, because the company missed the deadline to present appropriate documentation.

The ministry also informed that the same company is at the second stage of a tender conducted in the two regions Kakheti and Kvemo Kartli, which is also not finished, and the company has to present documents today in order to continue being part of the competition.