Yazidis in Tbilisi call on the world to stop ISIS

Yazidis in Tbilisi call on the world to stop ISIS 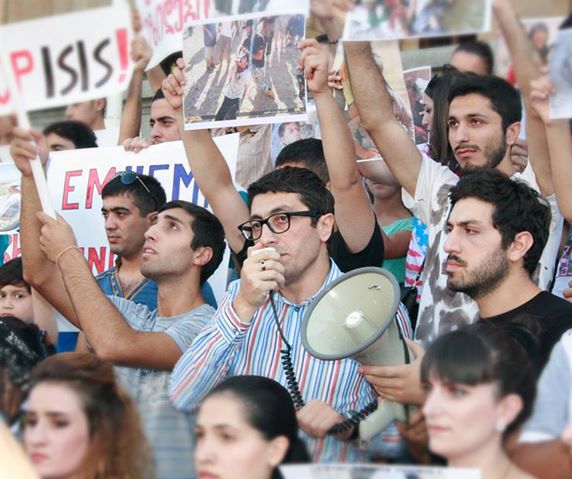 Yazidis in Tbilisi demonstrated against the brutal attacks on their people by ISIS in Iraq. (Photo: Georgian Union of Kurdish Youth.)

TBILISI, DFWatch–‘Stop ISIS’ was the slogan of a rally organized by the Yazidi community in Tbilisi as a show of solidarity with their besieged countrymen in Iraq, who suffer from ruthless savagery by the terrorists from Islamic State of Iraq and Syria (ISIS).

There is an almost 20,000 strong Yazidi community in Georgia, 90 percent of them have lived in Tbilisi during the last two centuries.

The rally took place outside the old parliament building in Tbilisi on Rustaveli Avenue.

“We must show Georgia and the international community the brutality against Yezidis in Iraq. The world is in danger,” organizers of the rally say.

Another solidarity rally was held by the Yezidi community on August 6 outside the UN office in Tbilisi, and was joined by youth organizations and representatives of different religious groups.

Yazidis are a Kurdish speaking people whose belief is different from the belief of other Kurds. They are followers of a pre-Islamic religion related to the old Persian Zoroastrism and Mithraism – sun worship.

Under pressure from Ottomans, thousands of Yazidis, along with Assyrians and other Middle Eastern Christians, moved from the territory of the Ottoman Empire to South Caucasus, then part of the Russian Empire. Most of them now live in Armenia and Georgia, centered mainly in urban areas.

ISIS, a radical Islamist movement, has outdone even their rival al-Qaeda in brutality, as they have pushed through the central and northern parts of Iraq on an offensive that has been a catastrophe for the region’s non-Muslim population, i.e. Christians and Yazidis. According to Iraqi officials ISIS fighters butchered hundreds of Yazidi civilians. About 300 Yazidi women fell in the hands of the terrorists as sex slaves.