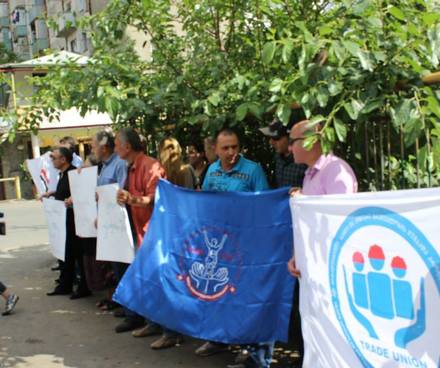 The workers want back the Labor Inspection to ensure a safer workplace environment. (Photo published by GTUC on Facebook.)

TBILISI, DFWatch–Georgia’s Trade Union demonstrated outside a hospital in Tbilisi on Tuesday to show solidarity with workers who were burnt in a fire in a coal mine the day before.

Two of the injured workers after the fire in a Tkibuli coal mine are still in a difficult condition and have been moved to the Burns Center at Tbilisi Referral Hospital.

Outside, members of Metallurgical, Mining and Chemical Industry Workers’ Trade Union demonstrated to demand safer work conditions and that the Labor Inspection is revived.

Gela Jughladze, an employee at the smelter plant in Rustavi, a town 20 km south of the capital, says it’s important to set up a labor inspection to ensure labor security.

“The inspection must control under what conditions the employer makes the workers work,” he said during the rally.

Tamaz Dolaberidze, head of the Metallurgy and Mining Industry Worker’s Trade Unions, says that it is important to determine the reason for Monday’s accident and whether it would have been possible to avoid.