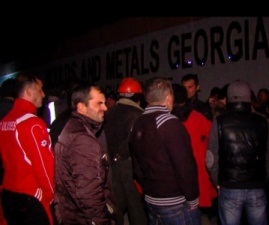 TBILISI, DFWatch–Port and metal workers in Poti went on strike Saturday, demanding to improve their work conditions and have a normal salary.

Journalists from the port city report that workers at the Georgian-Indian owned metallurgical plant were on strike the whole night and in the morning were joined by locals. They to demand better conditions, safer working environment and a proper salary.

The workers claim they have received a number of promises from the administration, but no real progress, even though they work 12 hours a day.

The metal worker trade unions came to the striking workers’ assistance and organized a meeting with the management.

“Every night, we think there is a war starting,” a local told Interpressnews. ”Noise, smoke, dust is everywhere. They’d better improve their technology or do something else. It is impossible to live here. People are getting poisoned.”

The plant’s management have not yet commented.

Meanwhile, the port workers in Poti held a rally to warn management that if it doesn’t accept their demands, they will launch a protest campaign. Workers demand proper salary, better working conditions and to have individual work contracts.

The workers halted the rally after management told them their demands would be accepted. They are now waiting to see whether this will really happen. The port workers in Poti protested after the change of government in 2012 and several times shut down the port.

Factory workers, miners, railway workers, and others were also on strike at the time, as hopes were lifted to finally see improved conditions when a new government came to power. Some places, demands were met, at least partly, while others are still continuing to protest.