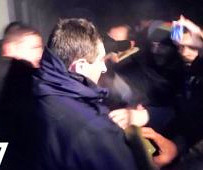 TBILISI, DFWatch–Coal miners on strike in a small mining town in the west of Georgia broke into the offices of the company that owns the mines Thursday evening.

Workers came in through the windows of the offices of Saknakhshiri GIG in Tkibuli, with the support of locals.

The company issued a statement saying that workers broke into its private property and created tension. It called on people to follow the laws and for law enforcement to react. Sakhnakhshiri also called for the perpetrators to be punished.

A spokesperson for the Ministry of Internal Affairs (MIA) was quoted by Interpressnews saying that the situation is under control and Tkibuli police were at the scene. According to MIA, some of the workers behind the break-in were under the influence of alcohol.

After one hour, the workers obeyed police orders and left the management building, but a few dozen remained in front of the entrance to the mine. No one has been arrested.

Workers say the strike will continue until their main demand is fulfilled, increased pay to compensate for Tkibuli losing its preferential tax status as a mountain community.