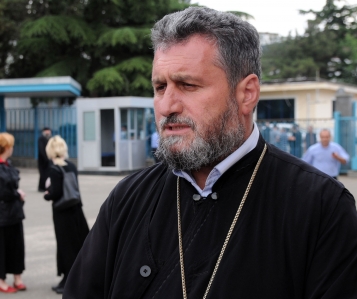 Mikael Botkoveli, head of the press office at the Patriarchate. (Interpressnews.)

TBILISI, DFWatch–The Georgian Church, the Patriarchate, has suspended a priest who recently claimed that the Prosecutor’s Office pressured him to give testimony against former Defense Minister Bacho Akhalaia.

Mikael Botkoveli, head of the press office at the Patriarchate, told journalists that the reason to suspend Nikoloz Tabaghua from being a priest was his ‘inconsistent and contradictory comments’ in public. He said that Tabaghua’s statements on television are ‘improper action for a priest.’

It is only a few months since Tabaghua became a priest, and it is still unknown how long the Patriarchate will suspend him for.

Nikoloz Tabaghua, whose first name at the time was Temur, was head of Prison No 10 in 2006-2011. This was the prison were the four convicted of murdering bank employee Sandro Girgvliani in 2006 served their term. According to the investigation, which was re-launched by the new government, all four were enjoying priveleged conditions in prison. Tabaghua has been questioned about this several times.

After his last questioning on August 13, his family posted a video appeal by Tabaghua in which he said that the Prosecutor’s Office had forced him to say ‘things which would harm Bacho Akhalaia’.

The same day, the Prosecutor’s Office responded that the investigation has enough testimony from other witnesses proving that the prisoners really were allowed special priveleges, but that they will study how he was questioned.

Asked by Netgazeti.ge how Tabaghua became a priest if he was head of prison in 2011, Botkoveli said that he doesn’t know, but he explained that a person must graduate four or five years of theological seminary or at least, as an exception, study externally; but Tabaghua doesn’t have theological education.

“If he was pressured, he should have told me, or the archbishop or directly to the Patriarch. Otherwise, what is this?” he said, adding that if he had told it to the Patriarchate he wouldn’t have been suspended.